I think it is fair to say that L is not feeling 100%, as she drags herself to the gym with her dodgy ankle, bad knee, sore thigh and distinctly dodgy eyes. I guess she could always take one of our ‘guide’ dogs with her to the gym.

Also the best of luck to her as regards the heat; it was hot enough on the bike. Once home, I collapse on the bet with a wet tongue on each thigh. That being those guide dogs of course.

Eventfully I exercise the boys in the garden, which doesn’t take long in this heat, until L returns. Then I head off to Derby for another British Sea Power gig, L is letting me out of my own again in exchange for a British Tea Power mug. I purchase a rather nice, if small, retro see-through number.

Tonight they are playing at the Venue in Derby, which I think is just an overnight stopover on their way up to Scotland to play T in the Park tomorrow. It's a long way from Brighton you know. It’s our gain and I suppose you’ve got to pay your hotel bills somehow.

First up a Nirvana-esk (maybe) two piece support band who mumbled rather a lot, both when singing and conversing with the crowd, to the extent that nobody actually caught their name. Which surely removes any point of them actually playing? I think lacking this type of basic stage craft might hinder their career somewhat.

They are purely guitar and drums, with the drummer hitting his kit so hard that it displaces the carefully arranged BSP foliage off the wall.

At times they sound a bit like the Ramones, several men short. At other times they sound more Billy and Charlotte from the Subways and they seem to get progressively more dirgeful as they go along but overall I do actually I like his voice. They perhaps just need to lighten up a bit.

With them gone, it’s time to re-affix the foliage and hand out water to the crowd. It's hot in the venue tonight, stupidly hot, I bet they'll be no bear suits this evening. The heat also forces me to buy an alcoholic beverage in order to keep cool. There isn’t much choice and I instantly regret it.

Then the band take to the stage, possibly their prettiest stage yet. 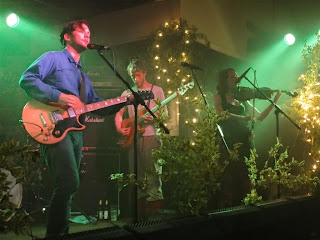 There are no great surprises in the set, sadly, but some decent oldies are rotated in tonight. ‘Something Wicked’, ‘Oh Larsen B’ and ‘Fear of Drowning’ make welcome appearances alongside a fair smattering from the new ‘Machineries of Joy’ album, as you would expect. . 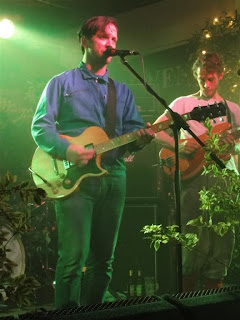 Four tracks in and the stage is awash with the sound of barking. Which is a nice touch, particularly with the RSPCA next door, as they move into ‘Loving Animals’ and a five track ‘Hamilton segment’. Although it doesn’t start well with a broken guitar that takes some time to replace, as the roadie seems to have trouble decoding what Hamilton’s furious waving of the injured instrument actually means. 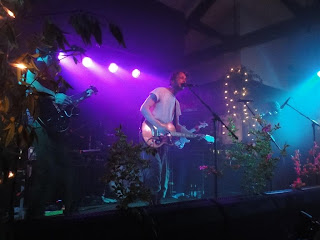 BSP’s travelling support have been bouncing throughout, despite the heat, and they up their game for ‘No Lucifer’ bringing bemused looks from the locals. Looks that get even more bemused when I am proved wrong about it being too hot for bears and Bipolar bear appears amongst the mosh during ‘Waving Flags’. Even amidst normal temperatures this sort of thing doesn’t happen that often in Derby. 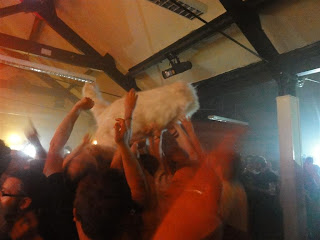 After disappearing, possibly to ring out his suit and for session in an oxygen tent, Bipolar is back for the encore and indulges in a spot of crowd surfing to ‘Carrion’. Then the brown bear appears too, guitarist Noble is off in the crowd hanging from the roof supports and Yan is doing handstands on the stage. Just a normal night out with BSP then.