Today I have the dubious honour of swimming in the rowing strip at the National Water Sports Centre, Holme Pierrepont.

There are three distances on offer: - 5k, 3k and 1.5k. No prizes for guessing which one I’ve gone for. L has opted for 3k and this starts at the very human time of 2.30pm. We head down a little early to check of the ‘Expo’, which is mainly for the Outlaw Ironman Triathlon on Sunday. The place is literally buzzing, mainly with folk getting ready for the Outlaw, racking bikes etc, but there are quite a few of us there purely to don some rubber.

We check in and are asked to show some photographic identification, as if anybody would pretend to be me and steal my place. We are then issued with a wristband (no idea what the purpose of this is), a timing chip and a coloured swim cap. Blue for the boys, red for the girls.

Then before long L is in the water and away. We have been briefed that the swim route is very simple. Straight up, round two orange buoys and then back, in a clockwise direction. Simple, as long as you can swim. 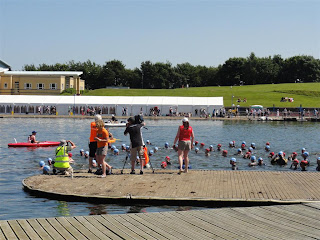 L has to do this circuit twice, with a little run along the bank in between. So almost an aquathon. Having seen her complete her first circuit, I start to get ready for my date with the water. Then they announce that my start has been delayed from 4pm to 4.30pm to give the canoeists a break from the sun. Which is fine, if only they’d told me before I’d struggled into my wetsuit. It’s very warm today and once the wetsuit is on, you start to melt from the inside out. I suppose what I actually need now is a cooling dip in the lake but as this is no longer available, I choose to take the suit off again. At least now I will get to see L finish.


Then it’s my turn. Everything starts off much better than at Windermere. Firstly they give us time to acclimatise in the water and I make sure I’m one of the first in, to maximise this. We also actually start from within the water, which also makes it easier. 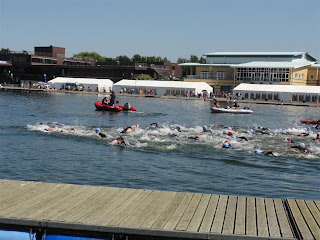 I almost enjoy the start and the early use of elbows as I jostle for position in the pack. I think eventually I get spat out the back of it, which I’m not too upset about. Then I realise I’m about to head butt the bank because I’m way off course, which is probably why no one considers me worth an elbow any more.


Clearly my ‘sighting’ (e.g. looking where I’m going) needs a bit of work but stroke wise I feel I’m close to getting the hang of it and I manage to do front crawl throughout. Wetsuit #3 also doesn’t seem to be choking the life out of me, which helps. Oddly though, I’m breathing almost totally over my left shoulder, which is something I cannot do in the pool where I almost exclusively use the right. I have no sane explanation for this.


The breathing also involves spitting loads of weeds out, which is an unexpected bonus but thankfully I don’t come across any supermarket trolleys. Thankfully because I know they have it in for me.


The main problem now is that someone appears to have moved the orange buoys because it’s a bloody long way. By the time I get there, I have cramp in both calves, which is a bit inconvenient. It comes and goes but doesn’t pass. At least, as I discover, in a wetsuit you don't need to kick your legs for buoyancy and can simply drag them uselessly behind you.


After a few more attempts at head butting the bank, which is accompanied by the unjust feeling that by doing all this zigzagging I must have swam twice as far as everyone else, I see the finish line.


As I reach the finish, I am more than happy to crawl up the slip way to the finish gantry but the marshals insist on helping me to my feet. Then they repeat this kind gesture after I have toppled over backwards as my legs temporarily decline the offer of terra firma.


35 minutes it took me, which is 10 minutes better than Windermere for 100m less. Sort of good I suppose.

In the evening we head off to the Gooseberry Bush in Nottingham on a bit of a retro evening which has been approximately 10 years in the planning. This is where we always used to start our nights out when I was a student... erm, 25 years ago. This night out has been requested by my friend in Newark, so that he can show his wife some of the student dives we used to hang out in. Sadly, or perhaps gladly, most of these have since closed down and the Bush itself is now a Wetherspoons. What’s more he rings to say they can no longer make it, so that was 10 years of planning down the drain. Although the three of us and partners, who are there, have a great time.