At today's dog show, that little s*d, MD, does a brilliant first run. Unfortunately it was Grade 3-5 glass so we didn’t expect to finish high up and were delighted with our 7th place. His second run was good too but we had a pole down.

We have one exceptionally good run in the afternoon as well but unfortunately MD had one of his 'moments' in the middle of it which costs us several seconds and we finish 8th. Without which we’d have probably been on the podium.

There were no runs for Doggo today until they decided to run an extra ‘pay on the day’ class that anyone could run. Veteran dogs were allowed to run at the lower Veteran height against the other dogs at their normal heights. It was a tricky course, much harder than a normal Veteran one but Doggo nails it with a nice clear. MD has a go too, on full height, and gets eliminated. So bragging rights to Doggo then. Even more so when they announce he’s come 6th.

In the evening we're at Broadway and vroom vroom... Rush, which takes us back to the days of Formula One in the 1970s. In what was, in most people’s eyes, the heyday of the sport. A time before it was dominated by professional sportsmen and technology, when it was still exciting and had real characters driving the cars. Sadly, in those days, a F1 contract also came with the chilling statistic that most years a couple of drivers would be killed. To take such risks meant you had to be a certain type of character in the first place. A nutter.


The story centres on the rivalry between two such nutters, James Hunt (Chris Hemsworth) and Niki Lauda (Daniel Brühl). We meet them both, through their own narrative, back in 1970 racing in Formula 3. Hunt has one of his trademark crashes, goes to A&E and comes home with a nurse under his arm. 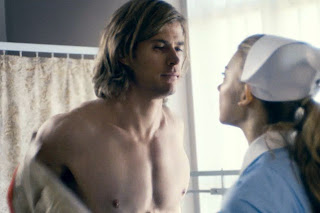 This immediately reinforces the image of Hunt as the cocksure playboy of the day. A man who before each race would extinguish his cigarette, finish his pint and reluctantly put down his pit girl before heading off to win the race. He was the man men wanted to be and women just wanted. 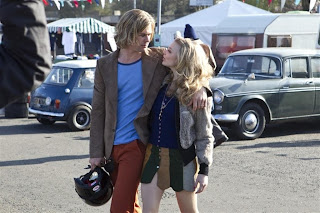 By contrast Lauda was the purposeful Austrian professor who took a keen interest in the car he drove and lived a staid lifestyle, all in pursuit of victory. 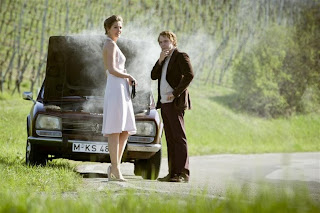 In truth they were not such polar opposites. Certainly Lauda, who was a consultant on the film, was the more professional but even he, liked a good party and a good woman or three. Also, far from being sworn enemies, they were actually great pals. In their early days, they shared a flat and probably their women. This bit of artistic licence though doesn’t seem to matter and the film gives us two great characters.

We fast forward through the years to 1975 where Hunt teams up with the eccentrically amateur Hesketh Team. Where, after a good season, he manages to get himself a top drive at McLaren. He now goes head to head with Lauda’s Ferrari.

1976 was a complex season and the film simplifies things a touch but with so much off the track bickering that season, lead always by Ferrari, perhaps that was wise. Even Lauda got fed up with Ferrari in the end and moved on. 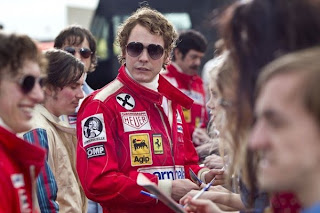 The centre point of the film is the German GP at Nürburgring, an epic but horrifically dangerous 14 mile circuit that weaves through the woodland of the Eifel Mountains. Lauda tried to persuade his fellow drivers to boycott the race due to his safety concerns. The drivers refused and on the second lap of the race, Lauda himself crashed and his car burst into flames. By the time he was pulled free by his fellow drivers he had suffered third degree burns to his face and head as well as suffering lung damage. He lay in hospital in a coma and they administered the last rites to him.

At the time Lauda was the championship leader by a large margin. In his absence Hunt set about closing the gap but only three races later Lauda turned up at Monza in his bandages and raced. 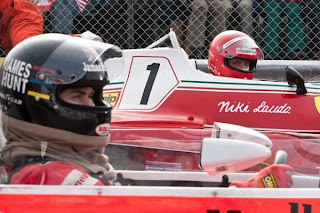 It all meant that going into the final race at Mount Fuji, Lauda led by a mere three points. The race, held in appalling wet conditions, saw Lauda pull out not wanting to risk his life again and Hunt recovering from tyre trouble to do just enough to clinch the championship. No doubt he headed home with the trophy under one arm and yet another girl under the other.

It is an excellent film. Hemsworth and Brühl are both impressive and convincing in their roles. The film even manages the rare feat of making the audience root for both of them.

The era is recreated almost perfectly with numerous F1 cars dragged out of retirement and the attention to detail is impressive. All of which successfully transported me back in time to when I was nine years old.