We skip the hotel breakfast and head into the City Park, where it proves to be much easier to find the race HQ in the daylight. It’s already warm, even before the 9am start, and I think it’s going to get warmer.

There are hundreds of foreigners in the race and we get chatting to a chap from Milton Keynes who is currently working in Budapest. We stop talking to him when he indicates he intends to run the course in 1:32. 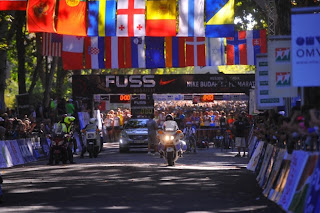 At 9am, we’re off and running back across Heroes' Square, then most of the first four kms are in a straight line down the World Heritage site of Andrassy Avenue. I’m not too sure what constitutes a World Heritage site but I’ve certainly never ran down one before, so that was pretty cool. 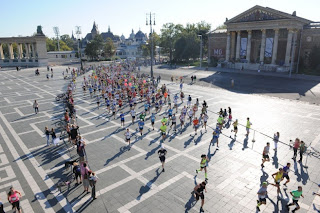 Then we hit or rather cross the Danube on the Chain Bridge. The Danube divides the two districts of Buda and Pest and now we are in the former. Most of the course takes place along the banks of this mighty river, on one side or the other, until after 16km we head back to the outskirts, across Heroes' Square again and to the finish back at the City Park. 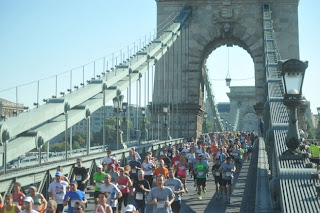 It was one of the most scenic races I’ve ever ran. Budapest is an impressive city steeped in multicultural history. From the Romans through the Austro-Hungarian Empire, the dalliance with the Nazis and the communist occupation via Ghengis Khan and Attila the Hun, after whom most of the streets seem to be named. 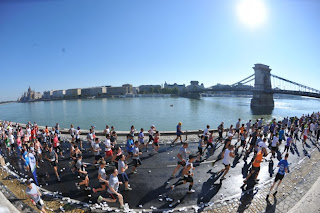 When I remembered to look at all this impressive-ness it was a handy distraction to take my mind off the suffering. As I’m wearing my GB Olympic top I get a few chants of ‘Go Team GB’ which also helps with the morale.

The temperature was by now approaching 30 degrees but luckily the drinks stations are plentiful, except oddly there are none in the first 5k but thereafter they are everywhere. They have also given everyone a sponge and there’s a bucket to dump it in at every drinks station, so I take full advantage of this.

The temperature rises higher still as we pass the cheerleaders... 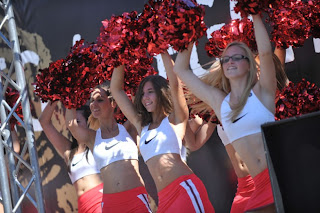 It's all oddly very un-PC, so well done Hungary for that and the girls do an outstanding job of raising the morale of at least the male runners.

It’s a largely flat course but one thing I’d forgotten about was that we’d be running in metric which didn’t help the pacings per mile that I’d got in my head. Some on the hoof mathematics made me decide that 4:45 per km would see me home in a reasonable time. Unfortunately I regularly missed this target and was surprised, but delighted, to find my mathematics a bit off as I came home in a satisfying 1:43:11.

After a bit of lying down in some very crap grass. It’s all crap actually, it’s like MD has been around the whole park wearing it out, I head back towards Heroes Square to watch L hobble home. She shouldn’t really be running at all and hasn’t trained, so just finishing is an achievement.

Just one more thing to get and that’s our race t-shirts. Which were rather bizarrely being handed out, not at the finish or with the start packs, but at Nike's shop a mile away in Budapest's West End Arcade. It takes us a while to find the arcade but then when we do there is no mistaking that we are in the right place as we join a very slow moving queue.

There's probably only about 60-70 people in the queue but it takes 70 minutes to get to the front because they are making everyone sign for their shirt. This is almost as long as it took me to run the race. Once there we are told only XS and XL men's sizes are left or they’ll order our size in and we can pop back in a few weeks to pick it up. Like that’s going to happen.

Finally, more exhausted than ever now, we head back to the hotel to freshen up and to put the ‘do not disturb’ sign on the door.

In the evening we hobble back down Andrassy Avenue to paint the town a faint shade of red. We are tempted into a street cafe by its enticing menu offering a traditional three course Hungarian meal for 2500 HUF and their equally persuasive identikit Hungarian waitresses. They have decent beer too. The meal is so cheap and one of the waitresses' shorts so impressive that they even get a tip. 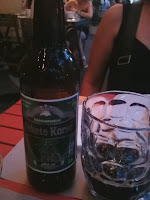 Afterwards we find another bar for a few drinks, a place that translates roughly as the Sailor’s Bar, before another hobble back to the hotel.