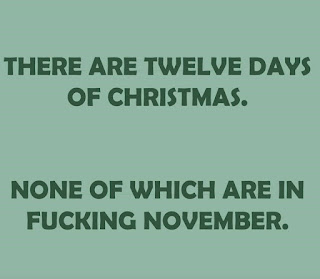 It’s the 1st November today, it isn’t Christmas. Although even L is talking about the jingle bell collars she spotted in Kennelgate yesterday. Poor dogs...

Talking of which, one of them, Doggo scarpered and hid under the computer table in the back room this morning. This was after L shut the gate to stop his escape upstairs, so he went for the next best option rather than go as required into the front bedroom. He’s resourceful isn’t he?

Day 23... The builder rings and asks if I want the pipework behind the toilet boxing in with tiles, wood or plastic panels. I’m tempted to say ‘just ******* finish it’ but politely go for plastic.

Finishing date is currently still (officially) today until he rings again later and says ‘see you tomorrow’ so not today then.

I’m on the bus as I’m out of on the razz this evening. We start off, as ever, in the Brunswick where I have my
100th dark beer since I started the challenge back on my birthday in April and I couldn’t really have picked a better beer to celebrate with. Dogbolter! 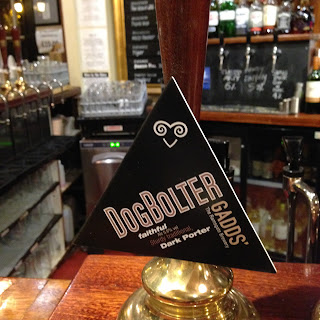 Dogbolter was created by David Bruce back in 1979 and of course became notorious across the Firkin pubs. It was allegedly a copy of Old Peculier and now this is a copy of the copy with the brew now produced by Gadds, brewed by one of Bruce's staff from back in the day. It doesn't appear to have been tampered with and still tastes terrific.

There is no food on Tuesdays at Brunswick so we then head to the Babington to eat.

On the way home I am told first to find Doggo tied to a lamppost in the Spinney then I am told it will be MD who will be strapped up there. In the end L walks both of them up to meet my bus.