After paying £3900 for the campsite, well he did knock £3861 off when pushed, the expenses continue to mount as L’s coat is pinched. I did think she was being a bit daring leaving it in the drying room but she did say it was an old one that she wasn’t too bothered about. Still we didn't think some light fingered b****** would pinch it.

We embark on a wet weather walk along the valley floor. There are hills here apparently but we can’t see them though the cloud. 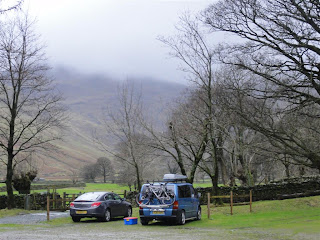 Then we pub crawl our way back down the valley. First, the Britannia but only for hot tea. Then the Wainwrights before we go very left field and head to the New Dungeon Ghyll for food. Always the least impressive of the valley’s bars due to it lacking quite the same atmosphere and a decent beer range. They have a band on tonight, so that should improve the atmosphere although it will upset the dogs, so we need to be out before they kick off. The beer range still needs attention though but the food is good, as we eat there for the first time in over ten years.

It was interesting reading about the history of the place. It opened on Boxing Day in 1991. Before that it was a farmhouse that in 1832 became a hotel, that apparently wasn’t finished until 1862, 30 years later. However in the 1950s it became a shop and a petrol station, then in the 1980s an outward bound centre for underprivileged children before the current owners bought it and turned it back into a hotel. It is still run by the same family today. 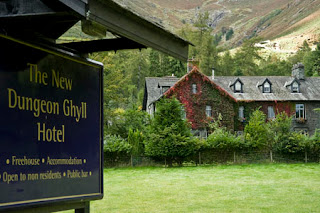 I wonder about the history of the nearby Sticklebarn but can’t find anything out. It must be of a similar age. It’s full to the rafters tonight, so we don’t go in and head to the Old Dungeon Ghyll instead, where the usual peculiar people were drying out and drinking beer that was neither old nor peculiar but may have gone by that name, awaiting the New Year. We join them but would probably have been on the floor by midnight, so we retire to the tent to see the New Year in there.

One of the problems of the Lakes in the winter is that you can’t really walk much beyond 4pm due to the lack of daylight and as we’re camping we can’t really retire to our accommodation for a few hours either, so you do tend to start drinking and eating a lot earlier than you would in the summer.

So we’re back in the tent before midnight, when I promise to dig L in the ribs so that she doesn't miss the year’s end, whether she wants me to or not and the evidence supplied by her dropping eyelids is that she probably doesn’t. In the end there is no need as fireworks light the sky, MD goes off on one and Doggo quivers in the corner. We restore order, eventually, and enjoy a happy New Year close to nature... as a howling gale brews up down the valley.