Mince pies in bed this morning, the height of decadence.

Daughter is dispatched over to her father’s for Christmas where Son is already headed. At one point it looked as if one of them would be with us for Christmas Day and the other for Boxing Day but eventually they managed to get themselves grudgingly synchronised.

Then we head into town to see something Christmassy as is our festive tradition. On the way I continue my search for a Santa skirt for L. No, not for a sexual fetish, well not much, for her to run in, to go with her Santa hat and festive earrings. Unfortunately it seems the main supplier for such things is Ann Summers... so clearly it's a common fetish. In there though they have nothing smaller than a size 22, 24 or 26? Which it totally frightening. I wouldn’t want a size 22 Miss Santa coming down my chimney let alone a size 26 one. A quick wander though the market secures something similar. As it’s 4pm on Christmas Eve I think a bit of price haggling is warranted and proves extremely successful.

So to our Christmas film. In the last two years we’ve done ‘It’s a Wonderful Life’ and ‘White Christmas’ but this year I’m in charge. L has already taken us to 'Arthur Christmas', so I think I’m justified. So tonight it’s ‘Drive’.

‘Drive’ is the story of a ‘driver’ (Ryan Gosling), a man who is never named. He works in a garage but moonlights as a stunt driver, a budding racing driver and as a getaway driver for the local criminals. That’s a lot of driving.

He’s a bit of a loner, who doesn’t go much for words or even facial expressions. Although he does break in to a smirk of sorts when he finds out he’s got Carey Mulligan (who plays Irene) living next door. 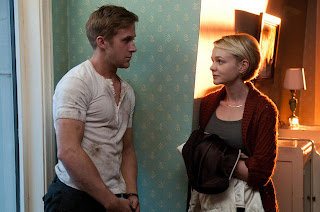 Then Mulligan is at it too, throwing in big deafening silences and long evocative looks, in her case trembly, dewy-eyed and innocent ones. The two of them say so much by not saying anything but it works. In this way she sort of hits on him and he gets involved in her life, befriending her young son Benicio along the way.

You can only assume she’s fallen for Gosling's tough but caring persona and his silent charm, it certainly wasn’t his chat up lines, the few words he does utter are around the toothpick that hangs permanently from his lips. I’m not sure where he put that when he snogged her in the lift, which was the films only departure into passion and that was only as a diversion so that he could kill someone. This is a romance that never goes anywhere but then Mulligan does still only look about fourteen, despite having a son. 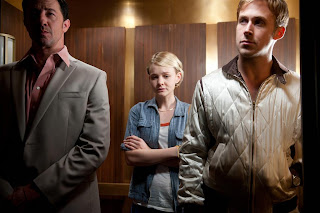 Now I’ve gone and mentioned the killing. Gosling's character bursts into violent life mid-film, embracing violence on a sort of ‘Eastern Promises’ level. It kicks off when Irene’s husband Standard (Oscar Isaac), who was in jail, is released on parole and people are keen to settle scores with him. Standard thanks our driver for looking after his wife while he was inside, seemingly oblivious to the chemistry sizzling off the pair of them, even in his presence. The two of them get on and our man offers to do a driving job for Standard to pay off his pursuers but it all goes horribly wrong. 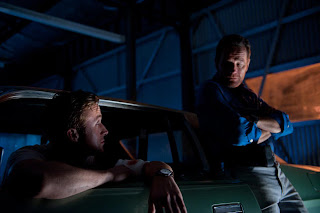 The violence then gets ratcheted up with the driver doing a hatchet job on all the mobsters who come to get him until it’s a case of last man standing. Some of the scenes are accompanied by the sort of gallows humour that is right out of the Tarantino scrapbook. 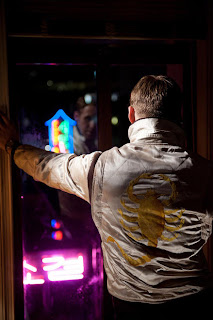 Overall it’s an absorbing piece of cinema. Some would call it slow but I’d call it tense and involving. The soundtrack is pulsating, the cinematography great and the dialogue lean, obviously. Even the car chases, of which there are plenty, don’t irritate like they normally would.

Acting wise, Gosling is great, the man gets more impressive with each film he does. Mulligan is good too and backed by a strong supporting cast of mobsters. One of the best films of 2011 or 2012 depending on when you see it.

Broadway is very busy but imminently closing, so we decamp to the Major Oak which ambitiously tells us it’s open until 1am. One of the few places playing to the ghost of Christmas Eve past, the former best night out of the year. We stop for one, visit The Bell which is busy too before finishing off in the Borlase Warren which is quiet but cosy.