The Cost of Camping

This morning Son is despatched back to Leamington by coach. Far cheaper than the train and it doesn’t involve again changes. We would have taken him but we’re heading to the Lakes and Leamington would have added a 100 miles to the route, so... no. He’s working New Year’s Eve for double time and a free bar, although apparently this may not be until 5am! Unbeknown to him and us, his boss is about to cancel his shift and not even open the nightclub, where Son works, on New Year’s Eve and 24 hours later Son will be heading back to Nottingham to see in the New Year. Oh dear.

Meanwhile though we leave Daughter in charge of the house. Oh dear.

We book into our usual campsite at Great Langdale. Yes, we’re camping and we just about get the tent up in the light, despite having all day to get up here. It’s actually unseasonably warm, although very wet. There are rumours about the beck flooding... Oh dear. It looks fine to me...

It isn’t actually raining as we pitch camp but the ground is so wet I don’t reckon it’s stopped much since we were here three weeks ago. The campsite owner confirms this as he charges us £3900 for 3 nights. Excuse me? I know prices often go up for the holiday periods but even so. We could almost have got a B&B for that. The most expensive camping trip ever. 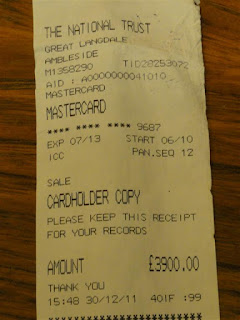 We haven’t been here for a few years at New Year. Actually when we think about it, it’s been quite a few years. We were last up here at New Year in 2001 and 2002. So nine years ago. How time flies.

In 2001 when the place was snow bound I reckoned there were around 50 tents on the campsite, it's probably down to around 40 this year. Probably due to the wet and a not very promising forecast. 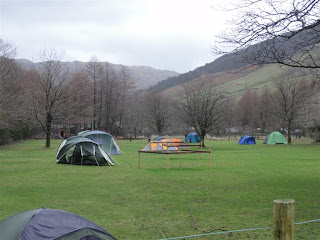 We spend the night in the Sticklebarn, supping Snecklifter. What could be better?