I bike in. It’s a bit chilly but at least I don’t have any punctures today. I have a new tyre and a new tube, so I would hope that’s cured it.

The number of complaints over Jeremy Clarkson’s comments reaches 21,000. Impressive but presumably it just means the rest of the UK's 62 million population either agreed with him or got the joke.

We decide to stay in tonight again, as I may be getting up at 5am to head up to Preston. I haven’t decided on a departure time yet but last night’s unscheduled night in was so very pleasant, it was worth a repeat.

For romantic entertainment we watch the gruesome thriller the ‘Bone Collector’ which is based on the Jeffrey Deaver’s book that we have both read, well listened to. I thought the book took a lot of getting into but at least a film will usually get straight to the point. Although I can see the film is terribly miscast before we even watch it. Denzel Washington and Angelina Jolie are not remotely appropriate and they have to rewrite the roles for them. In fact they rewrite nearly everybody’s roles, so it’s not a great effort. 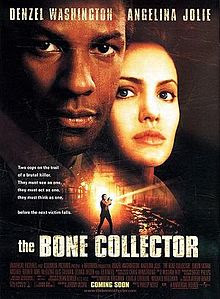