A Druid On A Hill

There was a druid with a drum on the hill in Wollaton Park this morning welcoming in the Winter Solstice. Today is the shortest day, the first day of the winter solstice, druids delight. I hope MD saw her off. It was a girl apparently, a druidess.

As I head off to work, L heads off for coffee and mince pies with the Nuns... Not that she claims to even like mince pies and then, of course, she’ll be claiming she’s fat and unfit...

But not as unfit as the people I’ve just had to queue behind at the sandwich van.

Typical conversation –
“Oh no, you’ve got no bacon and oh no was that the last of the sausages you’ve just sold. Oh well it’ll have to a sausage roll and a bag of crisps instead then. Hang on as its Christmas I’ll make that two bags of crisps.”

...and I get the impression this is just to keep them going until lunch. Then one of them asks if the van could park a bit nearer their office as it was too far to walk. This is three doors down, about 50 metres.

The final game of squash for the year is a close one, 3-2. Followed by the end of season curry, for which we go to the Trent Bridge Inn, which is now a Wetherspoons. We’ve done their Thursday curry nights before and always been mildy impressed. Not so tonight, everyone’s curry is very bland or in the case of L’s painfully hot as well as bland. Won’t be going back there.

We get home to a house full of teenagers pre-drinking away time that in my student days we would have put to much more productive use in various bars around town. Still it leaves such bars freer for us to enjoy so I guess we shouldn't object. It also wasn't actually a house full, it sounded like a house full but in the end turned out to only be five, just a very noisy five. Pre-drinking was allegedly born out of a cost saving measure but they go out just before 11pm for the fag end of the night and still end up spending an astronomical amount. As they say, a drunk and their money are more easily parted...

I imagine Mark Cavendish would have turned up even if they’d done it live on Christmas Day. He looked absolutely thrilled with his win. A win gained with nearly half of the entire vote. Thoroughly deserved. 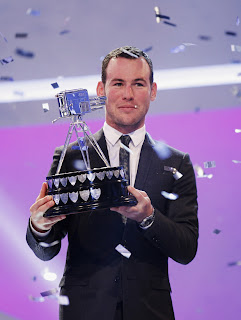