Girl On A Rope

I'm on the bus for a third day in a row. I’m off to Cirque de Lumiere tonight or Derby Roundhouse college if you prefer. We’re going back to school for our Christmas Party.

L’s still asking for Christmas present ideas for me. I’ve got plenty of those but she wants something that she can go into a shop for. How quaint.

Before Cirque de Lumiere this evening, I have two hours to kill after work, so two of us end up in the Alexandra, consuming four pints along the way. Too much or not enough to get through a Christmas Party? Time will tell, I’m not a great fan of Christmas parties.

I don’t intend having much, if any, wine at the party. What I didn’t bank of them was them selling Hobgoblin straight from the barrel. Their literature did say they would be serving ‘traditional local beers’ but I didn’t believe them, with good cause as it turns out. Hobgoblin is brewed in Oxfordshire, so it’s not local by any stretch of the imagination but it's still an excellent beer. Not as excellent as it used to be when it was 5.6% but still pretty good in its current 4.5% low alcohol form. 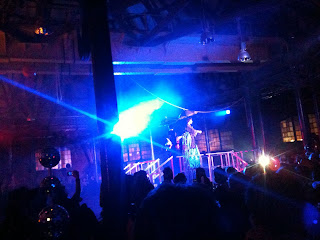 The meal is pretty good and the wine free flowing but I largely keep off it in the interests of staying conscious. I escape fairly early as I’m quite drunk and would like to catch the 11.20 bus.

I head home to L who can tell me all about the Christmas Panto she’s been too, probably quite similar to what I’ve been to I imagine, only I bet she didn’t have a scantily clad girl on a rope dangling above her head.