It’s not particularly cold, although there is snow on the hills, but the winds are not as low as they could have been and the tent does take a seriously romantic battering from the elements. Still, we’re snug and dry inside it. 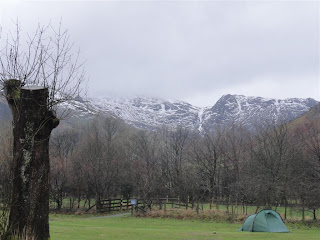 By mid morning things have calmed down and the weather turns out dry with little wind, just in time for the Great Langdale Christmas Pudding 10k which kicks off at noon. This is the self styled ‘people’s choice 10K winter run’, hmm maybe. L’s only here for the mileage, I’m only here for the beer but it has become a bit of a tradition.

There are as usual two races over two days with the Saturday proving more popular than the Sunday. Race organisers who run practically everything on a Sunday take note. Just under 300 today but nearly 430 yesterday.

They encourage entrants to dress in festive costumes and as I recall I got defeated by a green elf last time, although I was just coming back from injury. That’s my excuse. There’s no repeat today, as far as I know. There are plenty of Santas and even the odd pudding but I think they’re all behind me.

L looks very fetchingly festive in her red top, Santa hat and Christmassy ear rings. Something is missing though. Those little red skirts with the fur trim have a certain something... Perhaps I’ll get her one for Bolsover next week.

The course is the usual out and back along the valley road starting and finishing at the Sticklebarn pub. It’s not the greatest of runs for me, terrible actually. I was supposed to be taking it steady but not that steady. My time of over 44 minutes is two minutes slower than on this course in April but depressingly also slightly slower than two years ago when I was injured and ‘allowed’ to take to easy. I’m a massive four minutes off what I did in 2008, when I was a youngster obviously but we won’t talk about that. Good job half marathons are where it’s now at. I hope. 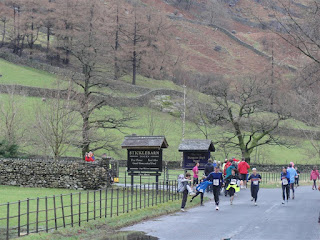 Every finisher gets a Christmas pudding, this year from Mathew Walker which is a big step up from the usual Asda/Tesco ones. It’s still a bit odd though, us coming up to Cumbria to collect a pudding made in Derbyshire, near from whence we came. I’m sure they could source some Cumbrian ones if they really wanted to. 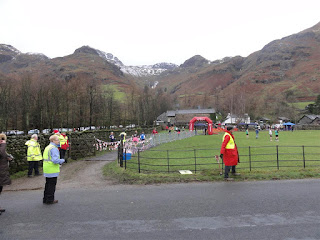 L is slower too but at least she’s got the excuse of coughing and spluttering her way around.

The queue for refreshments is a bit huge at the Sticklebarn, so we head to Chapel Stile and the Wainwrights instead to sample a new Hawkshead dark beer which is disappointing and the hot lamb cobs, which aren’t.

The problem with camping is we don’t have a hot bath to rest our weary legs in post-race and have to chill out in the tent instead.

We have tomorrow off work so that we can toast our disappointing times this evening, which we do in the Old Dungeon Ghyll, which is surprisingly busy for a Sunday night in mid December.

So which is better Snecklifter or Old Peculiar? L and I can never agree, so we have to go through the rigmarole of sampling both, again. This happens every time. It’s still inconclusive. L says OP, I say Snecklifter. So we’ll just have to do it all over again at New Year.