Standards To Keep Up

Oddly no hangover this morning, just a slight queasiness. What I need to sober up is a trip to West Bromwich for the Santa Paws 5k. Partly to chalk another three miles off L’s target but also to support the folk at K9Running who are trying to get their running with dogs events off the ground. Although they don't seem to be trying very hard. Little publicity and even their website doesn’t appear in a search engine. Rather worryingly the pre-race instructions were emailed to only three addresses and two of them were L and me. So I expect nothing less than a top 3 finish from both of us. We have standards to keep up.

It’s a good job we decide to go, when we arrive at Sandwell Park Farm this morning we double the race numbers. Yes, there are only four of us. A fifth person decided it was too wet and miserable this morning and has clearly found something better to do.

I hang back at the start, well try to. Not easy when you’re attached to a dog. The early leader doesn’t look particularly fast and certainly the dog assisted pace he is currently setting looks unsustainable for both man and beast. Hurtling out of control along the footpath, he comes across an icy path and down he goes. Oh dear. I stop to help him up like the good citizen/competitor that I am. Then we overtake him.

For once, when in front, MD doesn’t look back and we build a reasonable lead before backing off and taking it steady around the rest of it, feeling sure we have at least a minutes lead on him. What we didn’t expect was to come in and then wait around ten minutes for everyone else. As the minutes clock by, I look at my watch, thinking L should be in any time soon and second place is still up for grabs. Then the chap and L with Doggo come in more or less together. The chap beats them, just, so L and Doggo come in third or first lady if you prefer (sorry mate). The goodie bag includes antlers for the boys or are they for us, I’m not sure.

So I win and L wins. Can’t get better than that can you? A small field, yes, but you can only beat the opposition that is put in front of you. So a successful day really and as L points out my second win and again after a heavy night out on the ale. Which kind of rips the rules of perceived wisdom up.

In the afternoon they are holding a Fun Dog Show, you know ugliest bitch and all that, plus a variety of junior and ‘Have-a-Go’ 2.5K races, all presumably in the rain. Good luck guys, I fear you’ll need it, we’re off home.

Later we head into town and renew our Broadway memberships, which means we can then splash the resulting 2-for-1 drinks vouchers on getting oiled before we use two of the complimentary cinema tickets on something festive. Value for money so far.

We take our seats for Arthur Christmas, an Aardman production, which turns out to be informative stuff. It appears that the title ‘Santa Claus’ is actually a sort of hereditary peerage handed down from father to son. The current incumbent of the title is Malcolm Christmas (Jim Broadbent) who was passed the title from his father, the now retired Grand Santa (Bill Nighy). Malcolm is expected to retire this year to hand over the ‘reigns’ (ha ha ha) to his eldest Steve (Hugh Laurie). Steve is the smart arse currently in charge of the North Pole Command Centre that tracks the Santa ‘project’ across the world. Meanwhile his younger son Arthur (James McAvoy) can only look on in wonder, from the post room to where he has been banished, as he's accident waiting to happen. 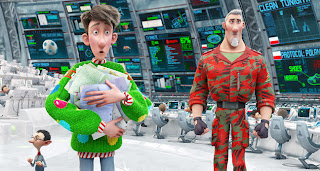 Christmas night is now a high-tech military operation involving thousands of elves and a giant spaceship in order to get millions of presents delivered in one night. Now it all makes sense at last. 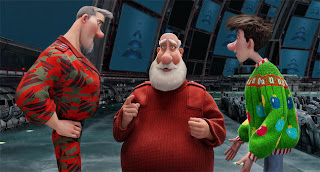 This year’s operation at first appears to be a great success and much to Steve’s annoyance, with Mrs. Santa (Imelda Staunton) by his side, Malcolm postpones his retirement. All though is not as it appears, one child has been missed and their present, a new bike, remains undelivered. 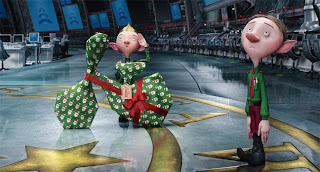 Steve refuses to attempt to deliver the missing gift being more than happy to accept that one minor blip has occurred in his operation, one present out of millions, not a bad ratio. So it is left to Arthur and Grand Santa, assisted by Bryony (Ashley Jensen), the elf from the Wrapping Department, to go on a renegade delivery mission using the olden day methods of sleigh and reindeers (albeit ones on drugs, they snort magic fumes to power them through the sky). All to ensure that one little girl is not the child Santa forgot. 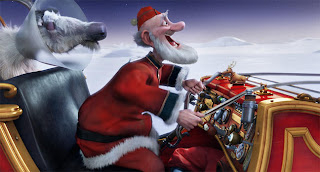 The idea behind the film is original, fun and very creative, at first. The film loses its way badly in the middle third of the film where too much mayhem ensues as our ‘heroes’ get repeatedly lost and into many sticky situations. It cheapens a great idea and feels extraneous. 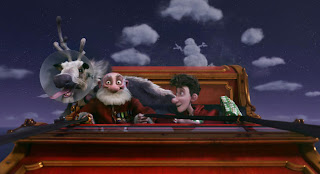 Eventually, perhaps half an hour too late, we meander our way to the expected heart warming finale that eventually just about saves the film. Good stuff but should have been better.

We pop into the old ‘Hogshed’ pub now known as the ‘Major Oak’. Very impressed with the good beer selection, including Ring O Bells, a Christmas Ale from Ringwood and a very retro video jukebox that does annoy as much as these screens usually do.