Back To The Gold Rush

So as we started the gold rush when we went down to London last Wednesday, I thought we best finish it by going again this weekend.

So we take the train and then travel across the Smoke to a hotel I’ve booked, rather cheaply in Charlton. Perhaps this is because the hotel looks cheap and sort of dangerous. Well at least the bar does. You wouldn't feel safe in there and that’s before you attempt to find something worth drinking. No wonder you have to go through two security doors, with different security numbers, to reach the hotel part. Which may be to keep their own customers out, as the hotel itself was actually ok. Basic but ok.

Then we head to Stratford and the hugely impressive Olympic Park. It’s also impressively big and the whole thing actually reminds me of Alton Towers... just nicer. Perhaps it’s the food prices... the lack of generic ‘ale’, which has sold out... and the queues for the merchandise. Although actually what I want, Team GB kit, has been sold out for weeks and they don’t appear to be intending to produce any more. Why is odd because such has been the kit’s popularity and judging by the resale prices on ebay they could have practically paid for the Olympics on kit sales alone if they’d produced more of it. 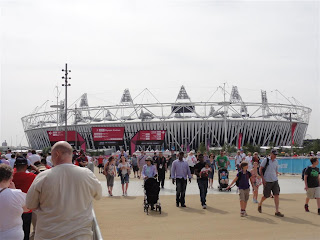 The atmosphere around the park, as it is all over London, is infectious. Contrary to predictions, the nation has, by and large, totally embraced the Olympic Games. Everywhere is awash with colour, from painted faces to the flags of many nations. There are so many union flags that you wish the flag manufacturers had done the kit because they seemed to have managed to meet demand. 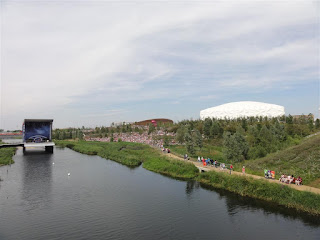 The ticketing ‘fiasco’ meant that hardly anybody got tickets for what they wanted and the big event seats went to those with the deepest pockets. This was perhaps a sneaky masterstroke from Locog, meaning that sports fans, not wanting to miss out, have packed out the stadia for the so called ‘minority’ sports instead and turned every venue into a cauldron of noise.

Tonight we’re at the Women’s Handball Bronze Medal match between Spain and South Korea (they have the correct flag up this time). 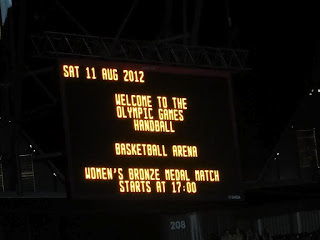 Spain are better looking so I’ll root for them, well they would be better looking if they weren’t all strapped up in bandages. It seems the risk of injury in handball is quite high.

The medal games have been switched to the Basketball Arena from the cosy Copper Box which had become notorious for its riotous atmosphere. 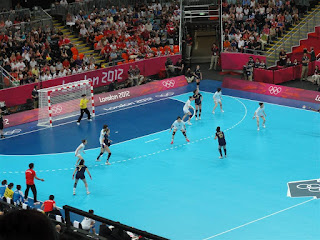 That’s a shame but the atmosphere here is still good even if the person behind us has a cow bell, from which we can ascertain that you cannot play Bohemian Rhapsody on a cow bell but they give it a go. 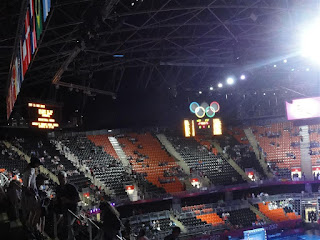 It’s a close game and they cannot split the teams in normal time or in extra time, so we go into sometime called double overtime, that does the trick, just and it's a good job too as both sides were running out of uninjured players. Well done Spain.

As we come out, we pass the Olympic Stadium just as the place erupts.

Mo Farah has just taken to the track before the start of the 5,000m. So along with everyone else we pretend to join a queue for one of the bars just outside the park, so that we can watch their big screen. Afterwards the queue quickly dissipates, joyously, as Farah impressively adds a second gold to the one he won in last week’s 10,000m.

Of course, as we’re in London today, it’s just one of many golds. Luke Campbell takes one in the Men’s Bantamweight Boxing and Ed McKeever kayaks his way to Gold in the K1 200m Canoe Sprint.

Later we’re in a Fuller’s pub called ‘The Pilot’, just a stone’s throw from the North Greenwich Arena, sipping pints of ESB to watch Tom Daley get his bronze medal in the Men’s 10m Platform. A good day.