Drinks On A Stick

Golds today from three women you wouldn’t want to mess with. Boxer Nicola Adams who’s obviously useful with her fists, taekwondo fighter Jade Jones who’s useful with her feet and dressage rider Charlotte Dujardin. All scary sports. Even dressage, I wouldn't mess with those horses. 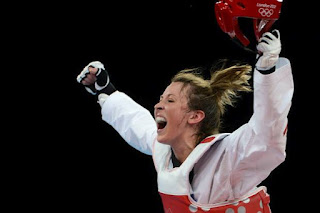 Another scary sport is today’s 10k Swim. All you have to do is look at the state of L’s neck, she still got some awesome wetsuit marks from Sunday, which she keeps having to explain aren’t the result of us having a domestic.

Keri-Anne Payne didn’t get a medal, she came in fourth but as L says '2 hours, bloody hell'. That says it all and she likes swimming. I prefer not to even think about it. We're both in awe of the woman. Who needs these runners that can only manage 10 seconds?

What’s even more awesome is that they have drinks stations... on the end of long sticks. I’d have surely drowned but then swallowing several pints of The Serpentine would have negated the need for these drinks in the first place.

Tennis tonight and I take the boys with me, as they are home alone. Son is missing in inaction. We were expecting him back on Wednesday but he’s proving elusive. He’s not answering texts, emails or good old fashioned telephone calls and has changed his name to Gordon on Facebook, although we don’t find this out until later. Perhaps he’s working for MI6 and has had to formally disappear. If so we can’t complain, we have been trying to get to find gainful employment.