L works from home this afternoon and I give her strict instructions to keep prodding the dogs to keep them awake, as I don’t want them disrupting the cycling later.

It doesn’t sound like she’s having much success. They do like a long siesta and apparently there’s not a great deal of life in them. There won’t be in me either by the time I get home. I’m not feeling fit enough to run, but we’ll see. I need to do my bit for Team GB.

Bizarrely I have a really good run home. I just keep going and going. I do 10 miles with no stops in 1:16. Bloody good. Perhaps there was a point to doing Friday’s 10k race after all. On the downside, I stand waiting for a bus, unable to walk and considering vomiting but it was fun...

The medals continue to roll in. Alistair Brownlee becomes the first Briton to win a Gold medal in the Triathlon. 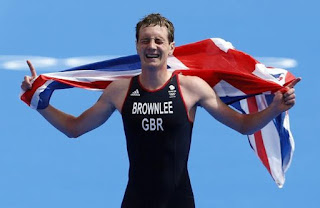 His younger brother, Jonathan, takes Bronze. Meanwhile the Equestrian team win the nation's first Olympic Dressage medal which was Gold, not that I'm even sure what Dressage is.

Then in the velodrome there was Chris Hoy recording a sixth Olympic Gold medal in the Keirin, Victoria Pendleton with Silver in the Sprint and then the Trotty Train crushing all before her in the Omnium.

So the track cyclists match their Beijing tally of seven Gold medals from ten events. Overall that 22 Golds now, three up on four years ago.

High Jumper Robbie Grabarz wins a three way tie for Bronze in the most boring high jump competition ever. Ten of the twelve finalists couldn't get past the third height and Grabarz ended up in a three way tie for bronze because they couldn't even split them on countback. A jump off anyone? The Russian winner was really the only one who distinguished himself.