This morning, after a leisurely start, our own Team GB head up to Morecambe. Dropping Son off on the way in Stoke.

We camp in the Lune Valley at Caton, which is just a few miles outside Morecambe where tomorrow L will, for the second year in a row, attempt to swim in the sea. Her loyal support staff of the boys and I are on hand to assist.

Last year the event was called off due to the presence of one too many imposing five foot high waves. I’m not sure what tomorrow’s weather forecast is like but tonight’s weather isn’t great. We are battered by thunder, lightning and then eventually rain. Scuppering any hope of a summer evening sat outside the local pub.

So the dogs have to hide in the car whilst we eat inside at ‘The Ship’ chosen in preference to the usually better ‘Station’ which has a wedding on, that it’s perhaps best we don’t disrupt.

Meanwhile momentous things are going on in London. Katherine Copeland and Sophie Hosking row their way to Gold, as do the Men's Four and on the track it’s the women’s three in the Team Pursuit who take the honours.

So a good day already before it's the turn of an arena not used to British success, the Athletics stadium gets in on the act. We sort of expected Jess Ennis to deliver, which she did, even winning the final 800m but Greg Rutherford’s win in the Long Jump was very unexpected. 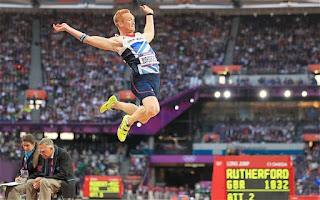 Which just left Mo Farah to cap off the night, which he did, destroying the field in the 10,000m. Breaking my time from Friday by around 17 minutes.... Now that's real running, none of this 10 second dash business...

and a busy night for whoever it who prints the stamps.