A rare outing for the bike today followed by a rare-ish outing from work to the pub for lunch.

No tennis again tonight. My opponent has been injured by a dodgy French sofa whilst on holiday. He did actually go away this year, I think last year they just turned the lights off and pretended for a week. Which is a good tip if you’re feeling poverty struck. Not only is it cheaper, there are no language problems.

Tennis would have been a washout anyway. Obviously good weather for canoeists though. Gold and Silver, plus Gold in the shooting and we’re up to 5th in the medal table... We’ve just been toying with them and that’s even before tonight’s track cycling.

Which doesn’t quite go to plan. At least not for the girls, particularly gutted for Jess Varnish and VP of course, but at least she’s got two more rides. Time for the Men's Sprint Team to save the day, which they do of course. 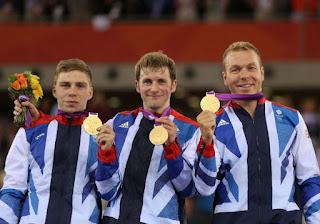