This morning we ride on the new Thames Cable Car which goes from the nicely renamed North Greenwich Arena (that dome thing) to the ExCel centre. 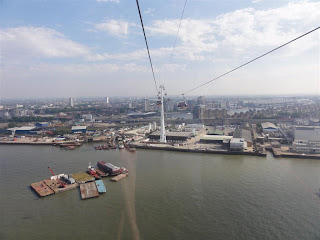 We had hoped this would be a short cut but in fact, an hour later, we end up back more less where we started. Still can’t complain about the transport system, it’s been impressive and the predictions of gridlock have not materialised at all.

Eventually we make it into the centre and watch the marathon pass us close to London Bridge. 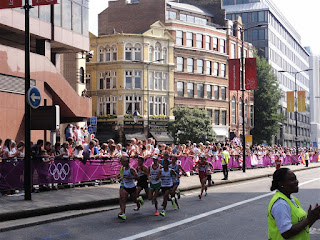 Again the atmosphere is great, the whole city is buzzing. The games are the best thing to have happened to London in years, probably ever. I've never seen London so clean or so finished. Where are all the road works and unfinished building projects? 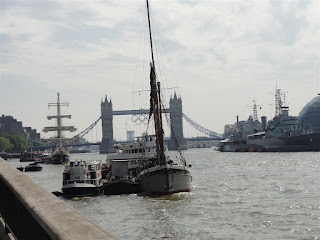 Even Londoners are smiling, that never happens. Perhaps the attitude of the wonderful games volunteers has rubbed off on them or perhaps after having been repeatedly told it’s going to be a disaster, everyone is just so elated that hasn’t happened. In fact, everything has been superbly organised. London has not only pulled it off but done so with great style.

We ponder about whether to stay and watch the next lap of the marathon or whether to head off to get a good spot in Greenwich Park for the Modern Pentathlon for which we have tickets. We opt for the later and get a good spot we do. 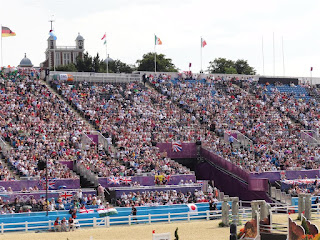 We have an excellent view of everyone being thrown from their horses during the show jumping section and also a great view of the run and shoot that follows. 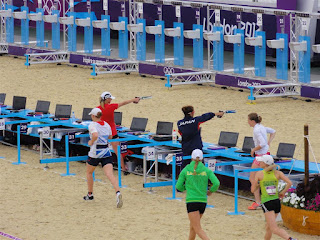 Even the weather is great. Perhaps too great as I sit slowing baking in the sun. At least I have a beer in my hand, which is probably one of the few things I can actually whinge about.

London brewer Fullers were in the running to be the official beer supplier which would have been great. Perhaps a rebranding of ‘London Pride’ as ‘London 2012 Pride’ and ‘ESB’ as ‘ESO’ - for Extra Special Olympics, but no. Instead the very un-British Heineken paid handsomely for the exclusive beer rights, or non beer rights, as obviously by the UK definition at least, it’s a lager.

What I’m actually drinking is something that they’ve generically called ‘ale’, totally unbranded. Although the staff openly tell you it’s John Smiths. Which is, of course, a very British name of long standing, although a shadow of its former self. Bizarrely this ‘brand’ name is actually owned by Heineken yet they choose not to market it against their parent brand...

A last gold of the games today for GB from Super-Heavyweight Anthony Joshua in the boxing but we get to witness in person the last medal of any colour, a silver from Samantha Murray. 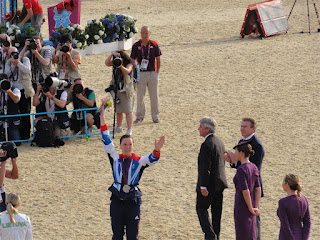 Afterwards we celebrate a very successful Games in a nice little beer cellar called the Wheatsheaf and then we eat in the equally pleasant Southwark Tavern where they are showing the closing ceremony.