A leisurely 1.30 start for the Morecambe Mile swim, something to do with tide times I believe. In fact when we arrive it looks like the swim will be more of a wade in knee deep water, even I could cope with that, but eventually the beach ‘fills up’. 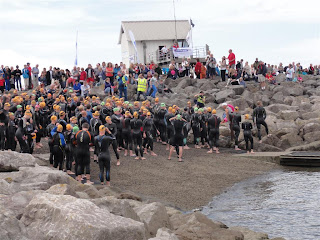 Again everywhere you go either the TV or the radio is on and turned to the Olympics. Which is fantastic. What will we all do when it’s over?

The Lancaster City Brass Band, who are there to serenade the swimmers, do their best to upset the boys but for once, they are both nonplussed by the noise or perhaps just more interested in the bacon sandwiches, with which we fortify ourselves for the race ahead. Watching is very energy sapping. 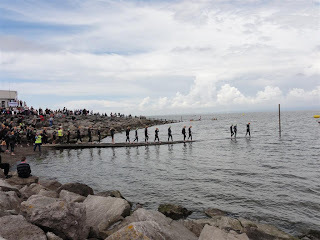 The water this year looks calm and they start on time. That is after a chorus of, bizarrely, ‘heads, shoulders, knees and toes’. A regular ritual it appears. 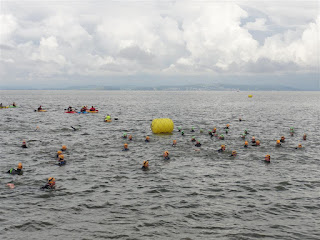 First to go are the 500m swimmers, then the milers. Apparently the tide will turn at 2.10 but no one mentions this until afterwards. The result is anyone taking longer than 35 minutes would have been battling against it. Which was no such problem for GB team member Sophie Casson who did it in a mere 20 minutes, quicker than some of those on the 500. Perhaps they should have reverse seeded it. 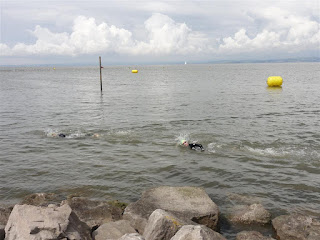 Doggo was initially keen to join in, quivering away in excitement on our rock from where we watched the event. That is until, what he thought was a running race disappeared into the sea and he fell off our rock in shock, getting his paws wet. 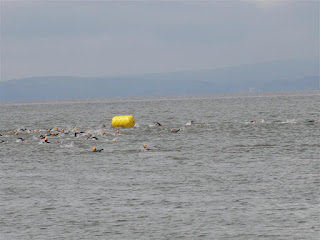 Afterwards we head back to Caton for Sunday lunch, in the now wedding free ‘Station’ before we head home.

Tonight’s Olympic highlight is the 100m, so I’m told, but I got bored with all the preamble, switched over briefly to the highlights of Andy Murray beating Roger Federer to win tennis Gold and missed it. I caught the subsequent 15 relays though. Some foreigner won in 9.63 seconds, which in my opinion is hardly worth putting your shoes on for. GB weren't even in it.

Murray meanwhile added a Silver with Laura Robson in the Mixed Doubles, whilst Ben Ainslie had to graft hard to win his fourth sailing Gold.

Then there was our Pursuit Gold medallist Ed Clancy, who deserved another medal for having spent the last two mornings stepping over his drunken Pursuit team-mates to compete in the Omnium. Now he can finally join them after snaffling a bronze.

I spend the rest of the evening watching Saturday night’s highlights back. These Olympics have been undoubtedly tough, the stamina and the late nights required to keep up with everything that is going on also requires a medal worthy performance.