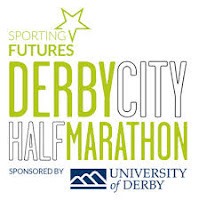 Apparently it has been 19 years since a half marathon went through the centre of Derby but today they are putting that right. This was something I expected the resurrected Ramathon to deal with in time but they have been beaten to it by the new kid on the block, the Derby City Half. This is a new race from Sporting Futures, the charity who organise the Derby 10K. There is even talk of a full marathon in the future.

With the involvement of Sporting Futures it is perhaps not surprising that huge chucks of the 10k course are used, although in reverse. The race itself starts on Derby University’s Kedleston Road complex and incorporates three city parks into the race.

The field is relatively small with around 600 in it. I’m not sure if this is deliberate for year one but it’s actually not a bad turnout considering the lack of advertising. If it causes traffic chaos then it should achieve sufficient publicity to massively increase its numbers for next year.

First up on the route is Markeaton Park where it’s all twists and turns on gravel paths before we’re heading back past the start and off down Kedleston Road which is straight and slightly downhill. So it’s a fast start and I’m already up on schedule.

Then we are straight through the centre of town, which is nice and with plenty of people out supporting including my nearest and dearest. L has been running, so hasn’t got the boys with her to cheer me along on this occasion.

The route incorporates the good bits of the 10k course but also the bad bits e.g. it’s a long dull drag across Pride Park to get to Alvaston Park where my father is loitering then a long dull drag back alongside the A52.

We then head out to the third and finally park, Darley Park, taking in part of the course of another Derby race, the Colin Potter 10k, before heading back to the city centre and then back to the University.

All the way through I am comfortably up on my pace, I was looking for a 1:44 but should smash that. However throughout the mile markers left something to be desired and the 13 mile marker arrived with around half a mile still to run which they crammed into the alleged last .1 of a mile. Several people reported that even then it was only 12.9 miles but I can’t confirm that.

The finish was seriously uphill but other than that it was pretty flat and I finished in 1:42:49. I'll take that.

Loved the race and I'll be back next year. It’s on a great date as well, midway between the other local city halves at Nottingham and Leicester. So hopefully they won't move it. It throws down the gauntlet to the Ramathon, Derby's other half despite a cheap looking medal and t-shirt. There was also a lack of drinks stations, luckily I had L on hand producing extra ones for me.

My parents come up for Sunday lunch afterwards and to see our new revamped abode. Then in the evening we head to the Horse and Jockey at Stapleford for a few drinkies.