I decide not to make another trip to work on L’s bike and take the bus instead. Big mistake. I arrive 30 minutes late as the bus decided to go on a scenic tour rather than wait it out in the queue on the A52. Never works.

I ring Park Bike Works again and a girlie there is very impressive in convincing me they have now ordered the wheel. If she’s bluffing she’s very good at it because when I ask her when they ordered it, she says Tuesday which is feasible. So it might be ready soon...

Flashback to February 20th 1990 in the short lived venue that was Bobby Browns Café in Nottingham and its utter bedlam. Security guards who should be guarding the stage are busy holding up the speaker stacks and preventing the fake palm trees (yes really) from toppling over, consequently stage diving is rife. I would say its standing room only but there was no standing room, healthy and safety had yet to be invented. Not bad for a band who had only released their début EP a month beforehand.

The band on stage were Ride, ably shredding the ears of their audience with their monstrous guitar sound. I’d gone through almost exactly the same experience two weeks earlier at Derby’s famous Dial, now sadly demolished, and had come back for more.

Now Ride have returned nineteen years after an acrimonious split with a comeback tour that we never thought we’d see and it has took an age to reach the provinces. A terribly disloyal but probably profitable US jaunt has delayed their arrival. As if to apologise the band are now playing two sets on this tour with no support.

One of these sets is to be celebrating the 25th anniversary of their début album ‘Nowhere’, which is to be played in its entirety and in order. Not that this would have taken particularly long as the original album only had eight tracks, so they’re playing the CD version with its bonus tracks culled from the ‘Fall EP’.

Personally I’d like to have seen a set dedicated to what I would call their defining era, those three EPs all released during 1990 entitled ‘Ride’, ‘Play’ and ‘Fall’.

Actually I'm not a fan of bands doing the whole album thing; it just removes all the unpredictability from set. The 1990 version of themselves wouldn’t have stood for that, Bobby Browns was a sea of unpredictability. Anything could have happened there and probably did but of course time has moved on.

For a start, tonight has a 10pm curfew then presumably its home for cocoa and security are clearing away everyone’s rucksacks (yes really) from the front of the stage rather than holding up the speaker stacks.

‘Nowhere’ is to be the second set, which immediately make the first set more interesting. 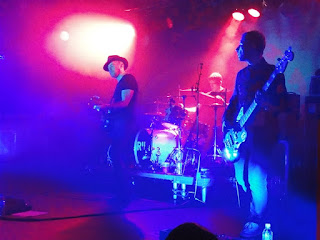 They come on to the sound of a This Mortal Coil track that precedes even their own existence and start work on the overblown ‘Leave Them All Behind’, the opening track of their second album ‘Going Blank Again’ but it’s the brash indie-rock of ‘Like A Daydream’ from the ‘Play EP’ that really kicks things off. It doesn't quite erupt into a sea of arms and legs in front of the stage like it used to but some folk in there are having a go.

It is perhaps not surprising that ‘Going Blank Again’ contributes a large chunk of this first set. Whisper it quietly, arguably a better more complete album than ‘Nowhere’. Tonight the likes of 'Twisterella', 'Chrome Waves', 'Time of Her Time' and 'Mouse Trap' all jingle nicely, sounding as sharp and alive as ever.

The only other EP track to appear is ‘Unfamiliar’ from ‘Today Forever’ and there’s a run out for ‘Black Nite Crash’ from the reclusive ‘Tarantula’ album. 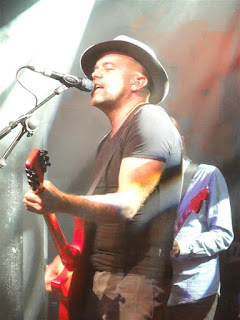 The band seem to have all aged well apart from perhaps Andy Bell who at times looks like he's done 15 years hard labour. Oh he has hasn’t he, 15 years with Oasis and Beady Eye. Mark Gardener meanwhile reels around the stage, thrashing his guitar, and wearing a trilby under which he may have folded up his former trademark floppy fringe but one suspects the hair doesn’t groweth as well as it once did. 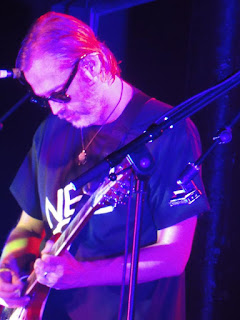 After eight songs the band take a break before returning twenty minutes later to the squall of ‘Seagull’ as they kick off ‘Nowhere’. The decision to tackle the album in full highlights to me what the album appeared to be at the time, a ragtag selection of all the unreleased material they had to hand rather than a record conceived in its own right. Fair play though that they didn’t just plunder the earlier EPs as many artists would have done.

Some of the album plods a touch but tonight ‘In a Different Place’ sparkles nicely and ‘Polar Bear’ is, as always was the case, immense. Then of course there’s ‘Vapour Trail’, one of the finest closing tracks to an album ever, complete with accompaniment from the crowd.

Next up the ‘Fall’ EP and the wonderful ‘Taste’ which gets a bit of a mosh going but the momentum is lost with the slightly monotonous harmonica driven ‘Here and Now’ but ‘Nowhere’ itself is an appropriate set closer. 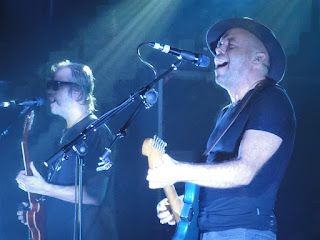 A quick exit and then they’re were back for the encore of ‘Ride EP’ tracks ‘Drive Blind’ with its sludgy wall of noise and then finally the awesome ‘Chelsea Girl’. If there’s going to be a mosh going to this, I’m in there. There is and I am.

It’s good to have them back and with what was such an assured performance that belied the decades. Yet I can’t help feeling that one shorter punchy set would have hit the spot a bit better.