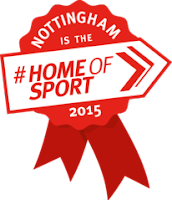 Nottingham is declared the Home Of Sport. It was a public vote, so it was most likely rigged by someone but Nottingham does have a good case.

For a start, Nottingham is home to both the National Ice Centre and the National Water Sports Centre. It has two professional football clubs, an Elite League ice hockey team and a Test Cricket ground. Nottingham also hosts both ATP and WTA tournaments at the Tennis Centre, is home to the GB Archery National Finals, the training base for the GB Short Track Speed Skating team and has also hosted international Hockey tournaments. There's also the award winning Outlaw Triathlon and numerous popular running/cycling events etc etc.

We also now have a brand new Olympic Sized Swimming Pool, should they ever decide to use it as such... but that's another story.

Presumably Nottingham is not going to also be crowned the Home Of Music as it is reported that a woman was ejected from a performance of The Bodyguard for singing ‘loudly and badly’. That really doesn’t happen often enough.