I’m feeling a bit retro at the moment, so The Mission’s 25th Anniversary Homecoming Show up in Leeds sounds ideal. I head up straight from work and due to the horrors of the M1 still don’t get in to Leeds until around 7.00 and then for some reason I can't find my usual car park. Well, the one I’ve used once before but I must be getting the hang of the place because I find somewhere much nearer and again cheaper than Sheffield, the most expensive place on earth to park. Well at least in the Midlands and the north.

I rush into the venue at 7.15, allowing just enough time for a quick loo break, had it not been half a mile away in the basement, before the first band come on at 7.20. The rush is to see Salvation, another band of the same era and one not easily seen these days. According to the bands website they have played only two concerts since 1991. In 2004 at a Private Party, bizarrely in my home town of Nottingham, that I wasn’t invited to and in 2007 with The March Violets at the Violets own Leeds homecoming show.

They’re a little late coming on, so a chance to look around. I’m at the Leeds Academy, yes another one of those. Better known, back in the day, as the Town and Country Club and if you’re really old, before that the Coliseum. The place has been out of circulation for many a year, carrying on as a just nightclub, before it got Academy-ised in 2008. Now it’s being used again as a 2,300 gig venue, although with some of those up on the balcony.

Salvation are from Leeds and have had links with The Mission over the years, touring with them quite a bit back in the late 80's. I’m quickly transported back in time by ‘Diamond Child’, ‘She's an Island’, ‘All and More’ and ‘Thunderbird’. Cue jokes about Thunderbird wine. Is that stuff still available? All this accompanied by a gentle mosh for the attending over 40s.

Four of the five band members tonight date back to the heyday of the band, so it’s another reunion on stage this evening. To their credit they sound exactly the same as they did back then, right down to Danny Mass’s distinctive voice. The only thing that has changed is that they’ve got older. I mean we've all got a bit less hair these days but blimey. Danny had such a mop... 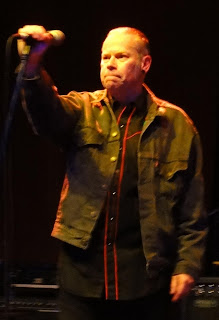 Then it’s great to hear the old favourite ‘Listen to Her Heart’ before they end a nine song set with ‘Why Lie?’

Being nicely gothed out after that, it seems a bit unfitting to have the Wonder Stuff up next, who don't really fit the blueprint. No offence boys... and girl. Still I've never been an objector, and I don't think I've ever seen them live. They are billed as ‘very special guests’ tonight, Wayne Hussey and Miles Hunt are the best of mates and have toured together, so it’s an understandable choice. 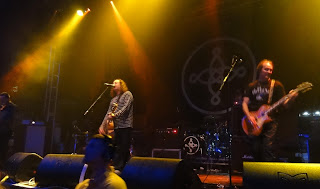 They start well with ‘Red Berry Joy Town’ with Hunt taking the stage with a bottle of wine in hand. Their set is good and the band lots of fun. Miles Hunt and co clearly love what they’re doing and that comes over from the stage. The downside is the nutters in the mosh pit that they attract. It gets exceedingly lively and this is just the warm up act.

They lose me in the middle a bit, going shall we say a bit baggy and folksy at times. Having a fiddle in the band I suppose makes this inevitable but at least it quells the violent moshing. 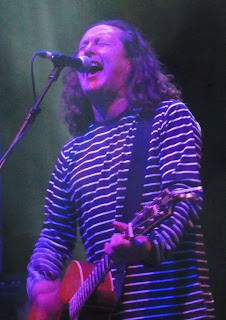 Which returns for a lively finish of the all the favourites:- ‘Size Of A Cow’, ‘Don't Let Me Down Gently’, ‘Give, Give, Give Me, More, More, More’ etc. Which causes Hunt to question whether he’ll be in trouble with Mr Hussey for tiring out his audience.

Near the end Erica, the violinist, disappears to change out of her party frock (shame) and returns dressed as a skeleton. Ready for Halloween I assume but still a bit odd.

Personally I think they were given too much stage time but the promoters clearly though two supports with a good fanbase were required to sell out the venue. The alternative would have been perhaps a smaller venue? Because at the end of the day it’s all about the Mission and they’re up next.

If you were a teenager in the eighties looking for an introduction to the world of live music in tight sweaty venues with all the trimmings that go with that you could not really have done better than discover the Mission. They seemed to be in Nottingham almost every other month throughout 1986-1988 and I had many a joyous evening at these fist pumping affairs. Time to dig out the old t-shirts, I’ve got a 1987 one but sadly not one going back to 1986. 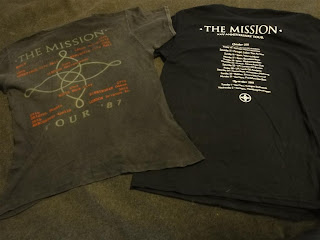 I haven’t seen them live since 1990, when a move to bigger venues and the awful ‘Masque’ album tested my loyalty, as it did many others. The band itself started to implode at around the same time and that really should have been that but Wayne Hussey soldiered on with Mick Brown, the drummer, until they disbanded in 1993... before reforming a few years later and playing with differing line ups until finally calling it a day with a run of farewell shows at the Shepherd’s Bush Empire in 2008.

Now it's the 25th anniversary, so there's money being waved around and money talks but Hussey has got original members Simon Hinkler and Craig Adams on board although sadly not Brown. Still it’s got me on board and what better place to rekindle the faith after 21 years than in Leeds where it all started.

What's more they seem to be up for it and it’s an absolutely fantastic opening, as the ‘Dambusters’ theme draws to a close and they open with the slow building, brooding ‘Beyond the Pale’ from their second album, ‘Children’. I think I'm the only one who would choose that as their favourite album. It feels like a proper album, whereas their first album was simply an accumulation of the stuff they’d been playing live. ‘Children’ had the feel that they’d actually sat down and written it. Sadly they only play two from it tonight. 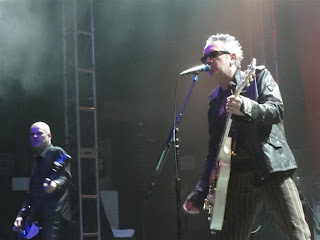 Next up ‘Hands Across The Ocean’, which seems a bit out of place, taken from the ‘Grains of Sand’ album which was basically an album of tracks that hadn’t made the cut for the previous ‘Carved In Sand’ offering.

For saying they’ve had less than a month to rehearse and a new drummer (who was excellent), the band sound great, looked relaxed and the old magic was there to see.

‘Garden of Delight’ was as good as ever but I’ve never been a fan of the band playing ‘Severina’ without Julianne Regan who contributed so much vocally to the original. 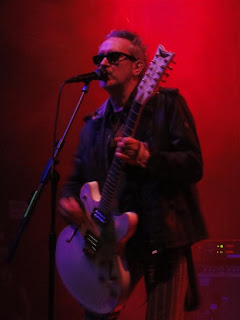 Hussey reminisces about Leeds and not very fondly. He recalls shooting a video here, in the old Town & Country Club but also of his house being burgled every time he went off on tour. Hussey actually hails from Bristol, Hickler as it turns out is from Sheffield, leaving Adams as the only Leeds native but never mind. Great to see Hinkler really getting into the part, complete with a hat again, nice touch. 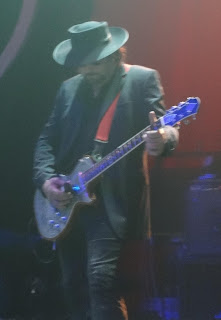 I forget how good ‘Butterfly on a Wheel’ sounds but remember how the appeal of ‘Stay With Me’ passed me by and still does. Before which Adams is persuaded to do the ‘Vigilante Man’, which I’ve never heard him do before. The guy really looks like he’s having a ball.

It good to hear ‘Wake’ included with Hinkler at the piano, a very early classic that always used to steal the shows and does again tonight. 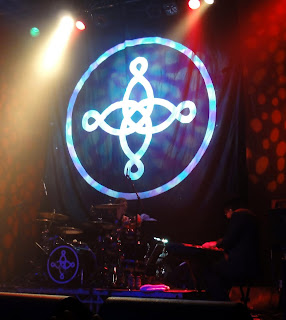 Then it’s a not so satisfying ‘Wasteland’ remix followed by a thumpingly good ‘Crystal Ocean’ and finally ‘Deliverance’ which provides quite an ending. Adams and Hinkler leave the stage but Hussey remains to lead the audience in the singing. Then he goes too, leaving just Mike Kelly, the man drafted in to play the drums and thereby halving the average age of the band at the same time. He stays to the end, with the crowd still singing. Very effective and effecting.

After just twelve tracks their gone. As I’ve said, too many support bands. While we await the encore I ponder the fact that many of the audience still look good in basques etc well into their 40s and as for the women... 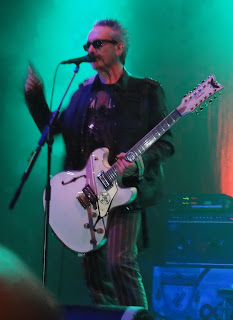 Hussey returns to play ‘Like A Child Again’ solo, a track that comes from that much maligned ‘Masque’ album and it sounds infinitely better acoustic than on record. With its ‘Like a Hurricane’ reference it leads into, what else but, ‘Like a Hurricane’. Then it’s a soaring (you have to use that word) ‘Tower of Strength’.

Then they’re gone again, returning for the classic that is ‘Blood Brother’ and the traditional cover of Iggy’s ‘1969’.

In all, a very good night. The only criticism would be that it was felt just like a Mission concert from twenty years ago, rather than an anniversary one... well, perhaps that’s no criticism at all.

L has been nagging me all day to take supply of biscuits and to get a coffee for the journey home, to make sure I’m awake. She was after all a good girl and had a biscuit every time I told her to when she was giving blood last night. She also had several when I didn’t tell her to as well but we’ll gloss over that. I do as I’m told but I’m buzzing after the gig so there’s not risk of nodding off anyway.