We leave the cottage at 6am for the twenty odd mile drive into Cardiff. The race doesn’t start until 9am but as we have the dogs with us the plan is to find a covered car park (in case it gets sunny) and as close to the start as possible. 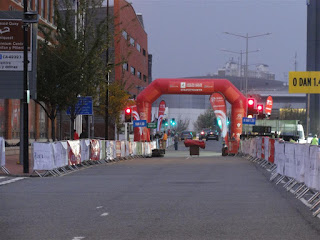 By 6.50am we’re sorted, parked in a multi-storey overlooking the start/finish. So that’s one tactical plan executed to perfection, now just the race to go. Parking is only £4 per day, all day. Sheffield take note. Soon after that we’re walking the boys around the race village. It’s our first time visiting Cardiff and we’re quite impressed. 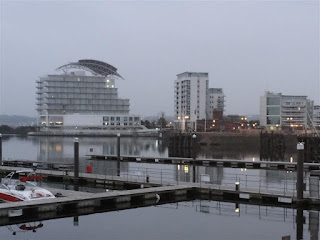 We have our photos taken in front of the Tardis... 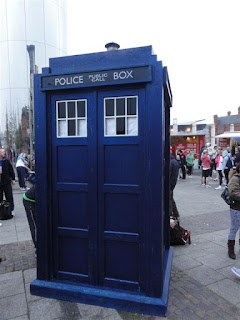 well it is Cardiff and isn’t that it’s most famous landmark? We even get to see the 2012 Olympic torch. All this and before it’s even light. That's a first, never turned up for a race before when it’s still been dark. 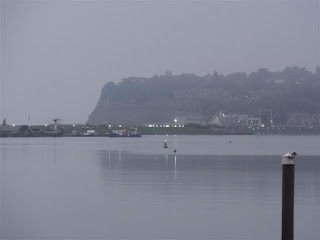 The race gained some notoriety and publicity in 2010, when it turned out to be short by nearly 200 metres. It doesn’t seem to have done it much harm with all 15,000 places sold in advance; although only just over 11,000 make it to the start line. Rumour has it that the missing 4,000 are all men who only entered because Sky TV babe Charlie Webster had her pretty face plastered all over the pre-race literature urging us all to come join her. 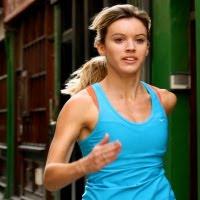 Only for her to tweet that she’s ‘Gutted not doing Cardiff half marathon this morning as planned...’ due to injury and nothing to do with the fact that the lifelong Sheffield United fan is covering the Sheffield derby for Sky Sports today...

Well our own organisation has run like clockwork, now what can the organisers do. There were complaints about congestion at the start last year so they’ve decided to colour code it this time. Although there are only three bib colours and they’ve put me in the blue sub-1:30 category. What are they like? Or more likely what the hell did I put on my entry form?

I feel for one of my comrades in the blue zone who comes out of one of the portaloos, falls down the step next to them and starts rolling around on the floor in agony. Oh dear, that ankle is not going to like doing 13.1 miles much.

Then Jamie Baulch starts us off and things go quite well at first. Although, I start too fast obviously. A point that is driven home when a herd of around 100 wildebeest trample me underfoot just past the three mile point as they charge past in pursuit of a chap carrying a little board indicating that he is the 1:30 pacer. Not much point tagging on the back of them, that's well beyond me today.

The drinks stations are a bit odd. Water at three miles, Lucozade sport at six and then what seemed a really huge gap until ten, by which point I was gasping and covered in energy gel. Gel that I had been carrying in readiness for a drinks station at around eight miles, which never came. Then there’s a final, rather pointless one in the last mile.

Oh and they handed out bottles with screw caps at that first water station, so I imagine the road was cobbled with thousands of them by the time the runners nearer the back came through. Not pleasant and a bit of a basic organisational slip up.

Other than that I must compliment the marshals and the crowd, who were excellent and out in numbers. Also the band outside the Royal College of Music and Drama. Overall there was a really good atmosphere and it was good running past all the Cardiff landmarks. Although later I find out that L has missed most of them, which is an allegation she usually levels at me. How could she have missed the likes of Cardiff Castle, the Millennium Stadium and the A4232 Link Road? Actually I’m sure she didn’t miss the link road. That long dual carriageway section was probably not to everybody’s liking but it was to mine. I like a bit of ‘switch off and plod’ and the views were actually great from there as well, the scrap yard aside.

These nice wide roads replaced the ‘popular’ pretty park sections, where everybody fell over everybody else’s feet, last year. So they’ll be complaints but you can't please everybody and anyhow who gets time to take in the splendour of a park while they’re running.

It’s at around this time that the Almighty decides to give me a sign of just how badly I’m actually doing. The giraffe, all twelve feet of him, nonchalantly sidles past me, waving to the crowd as he goes. I’m not the only one to be a little bit put out by this. The guy behind me appears to be organising a lynch mob, if only we can catch the thing, which at the moment looks unlikely.

The dual carriage way is livened up by the hairpin turn at the Bute tunnel which, with its proximity to the finish, is packed to the rafters with supporters and provides a very welcome spur to the aching legs. Then the last few miles across the barrage and through the Penarth Marina are pretty awesome, particularly as it was such a nice day and despite the fact some of us were being paced home by a giraffe who was about to go sub-1:40 and we weren’t. I mean, come on, who’s ever heard of a sub-1:40 giraffe?

I’m pleased with my time, considering the rib situation and I’m only 37 minutes (say it quick) behind race winner Edwin Kiptoo of Kenya, who set a course record time of 1:03.26. Smart arse. That is assuming he didn’t get the bus like that guy from Sunderland.

They’ve added a t-shirt this year which is good, the only problem being they’ve only ordered two sizes, medium and extra large. So naturally, and to the surprise of no one except perhaps the organisers, practically everyone goes for the mediums and they run out at around the two hour mark leaving a lot of women acquiring nothing more than an oversized nightie for their two hours of slog. The men doing over two hours weren’t that impressed either. Not good.

L comes in, not happy with her performance, let alone her new nightie. She’s becoming so like me as regards her performance and she is actually four seconds quicker than a month ago in Nottingham. I say at least it was flat, L protests it wasn’t. Well pretty much flat, except for those hilly bits.

The goodie bag yields yet more Redbush tea and yet more toothpaste but not much else. I’ve only just got down to the bottom of the two mini tubes of toothpaste we got from Nottingham and its not pleasant stuff. There is a sports drink in there but I think it’s from Aldi. So we decide that the appropriately Welsh Brains SA is a much better way to rehydrate before we head back to the cottage.

The Cardiff Half Marathon is still a race with teething troubles and rough edges but it was still brilliant fun. I’d recommend it.

We crave fish and chips as post race nosh but I can safely say that there are no chip shops in Cwmbran. At least non that opens on a Sunday. We checked thoroughly, driving around for ages before we finally found a Chinese and settled for that. Then the Bush Inn again, no band this time and more Caerphilly beer.