I Know Her Pain, I Think

A week after a horrible run home from work, due to the re-bruising of my bruised ribs, I try again. It’s still not a totally pain free experience but it’s not as bad as last week. Oddly pleasant and very very satisfying. I’ve been inspired you see. Former world Ironman champion Chrissie Wellington came off her bike and did considerable damage to her leg and elbow, 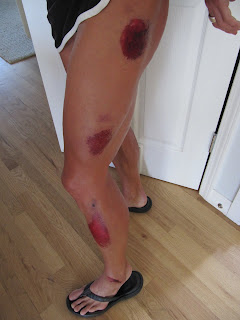 but it was the internal bruising to her upper chest and hip that was the biggest problem. I know her pain, I think.

Was this however going to keep her out of this year’s Ironman World Championships? Nope. An Ironman by the way is a 2.4 mile swim, 112 mile cycle and a full 26.2 mile marathon run. She's a nutter obviously but an admirable one because not only did she enter, she went and won the damn thing. So if Chrissie Wellington can win an Ironman with internal bruising then surely I can jog as far as Stapleford?

In the end I run almost 14k. Very pleasing and it wasn’t exactly slow either. I could have gone further but I wanted to get back to the boys who were home alone, so as soon as got to where the buses into Nottingham were every ten minutes, I stopped to catch one.