The race literature welcomes us to the 'former Birmingham Half Marathon' which has been Bupa-ised and is now known as the ‘Great Birmingham Run’ but as this gives no indication to the race distance we won't call it that. It is after all still a half marathon and it’s still in Birmingham.

The blueprint is the same as the equally spuriously named 'Great Manchester Run' which I did earlier this year. That was a 10k by the way. Again they helpfully put your name on your number, just in case you forget who you are and I’m again in the first ‘Orange’ wave along with all the elite athletes and a banana, but more of him later. there are four waves and L starts in wave three (green).

Parking is great and practical at the NIA and of course cheaper than anywhere in Sheffield. Everything is so handy, that we take the dogs and my father.

There’s bound to be considerable focus on the organisation this year following the farce of last year’s 'race for climate change' where a pinch point in the first half a mile caused everyone to walk and the finish descended into a shambles as runners queued up to cross the line. Now though, we get the Great Run's well honed organisation skills and everything runs like clockwork.

We clap as the star runners are presented to the crowd and then a huge roar goes up as the final one is introduced. Ah, Mr Gebrselassie we meet again. No doubt feeling he has to prove a point and show that beating me in Manchester was no fluke. Bring it on.

Then we’re off, funnelled through a bottleneck before the start, so that’s there’s plenty of space when you actually cross the start line. I baulk at having to actually run across the line, preferring to save those twenty metres of energy for later.

The crowd is a little quiet as I set off, perhaps all cheered out after Gebrselassie, but the public around the course more than make up for it.

Due to the lack of congestion, I get a much better start than last year and have to hold myself back a bit as everyone goes off like Usain Bolt on the downhill start. I refuse to get drawn into such a suicidal pace and decide to let the likes of Gebrselassie burn themselves out before reeling them in later.

As we run along Pershore Road heading out to Bournville, it soon becomes obvious that this plan is already in tatters. Here the course doubles back on itself and as I approach four miles Gebrselassie is already heading back and passing the six mile point. Tactics wrong. Again. I give him a reluctant clap anyway.

The elite women go past not too far behind, apparently they were being paced around by a chap dressed as a banana. I dismiss this bizarre rumour; surely it would have been a giraffe. We saw how quick they are last week. I think some folk have obviously had too much blue Powerade.

Yes it’s Powerade and not Lucozade this year. This means attempting to avoid those ‘blues’. There seems something not right about any blue drink, let alone a blue sports drink. Although I still end up with one before eventually getting a red one at the second stop.

There’s plenty of live music along the route including the lady vicar again. The course itself is generally flat until you come into Cannon Hill Park, at around mile eight, where it starts to ramp up. By the time you go through Edgbaston and past the newly renovated cricket ground it’s getting rather serious hill wise.

I don’t particularly feel either my cold or my ribs but still blame them both for my lack of training which means I’m not going to beat last week’s time, which was target number one. I’m certainly not going to be anywhere near last year’s time of just under 1:37 despite getting a much better start. A tight calf for the last two miles doesn’t help although I don’t think it actually slowed me down any either.

Then someone asks me to remove my chip from my shoe. Seriously, I can’t bend down there yet. I kick my shoe off, wobble as I retrieve it, and then attempt to pull the chip free of the laces. Five minutes later one chip is with the marshal and I hobble off with one shoe on and one shoe off. Ten metres along the road is a woman with cutters who could have cut the dam thing off for me. You should have been down there at the finish love.

Goodie bag wise... I’m sure they must all be in league with each other. More Redbush tea and more toothpaste. Argggh. Although at least there’s a chocolate bar this time. The T-shirt is a bit bland too. Exactly the same as the other Great Run t-shirts with just ‘Birmingham’ replacing ‘Manchester’, ‘Yorkshire’, ‘North’ etc (delete as applicable). At least they have a range of sizes. Cardiff take note. The most annoying thing though is that neither the T-shirt nor the medal say half marathon on them.

15,000 entered. Just over 11,400 competed in the end which is pretty much the same as last year but with a lot less hitches. 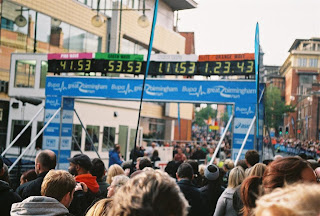 My mate Haile won of course in 1:01:29 and looked like he was jogging most of the time. Gemma Steel won the women’s race in 1:12:21, just ahead of the banana, bet she was relieved about that. At least it wasn’t a giraffe eh Gemma?. Seriously though, running 1:14 dressed as a piece of fruit deserves an award of some sort.

I head to the car to rescue first the boys and then my father. He’s been hemmed in the wrong side of the finish by the crowds which are impressively five to six deep along Broad Street. I dig him out and we just get a good position when L bombs past about five minutes ahead of schedule. Well impressive. 02:11:43. Six minutes quicker than last week. Then we all adjourn to the Malthouse for a pint. 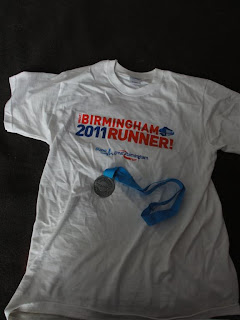 Later we try the Admiral Rodney for a change, who have Broadside on and Sunday Lunch, although that wasn’t that great. Then its home to fall asleep in front of the race highlights.