First problem, breakfast. The landlady usually does it for 9am but I need to be at the show for 8.15 and it’s half an hours drive away. I request breakfast at 8am, which is still too late but I don’t want to push my luck too much. I’m happy to arrive late at the show if it gets me a full English. I’ve only got one early course, for MD, and we’ll just have to ‘wing and a prayer’ that without walking it beforehand.

We arrive at the show about an hour late but with a cooked breakfast inside us, well, just toast for the boys. They are competing after all. It’s hot outside and like a sauna inside the equestrian centre. I don’t think I’ve ever been here when it’s not been cold and raining, or snowing but it’s good to see some things don’t change and there’s still muddy puddles here even mid heatwave.

Things start well. 2 runs, 2 clears. One for each of the boys, including the one with MD that I didn’t arrive in time to walk. It all slides a bit downhill from there.

If that’s the old man’s last G6 before he hangs up his collar then it wasn’t the best. He missed his dog walk contact. We don’t want any of that in the team event tomorrow. Meanwhile MD has poles down in all three of his remaining runs.

The thing is though, MD’s first run, the one I didn’t recce beforehand because I valued by full English more, was rather good. A cracking run in fact. If we hadn’t done a rather unnecessary pirouette in front of the weaves because he really didn’t see them and I had to pull him round in a circle to launch him at them a second time, I’m sure we would have won. That must have cost us at least .6 of a second if not more. I mention .6 of a second because that is how much the winner beat us by. We came third.

And our prize is... one of the much derided glass paperweights that we keep getting from running races, only this one has an agility tunnel inside it.

Meanwhile L checks out Fleetwood, crowd free but an hour away by bus, although only 7 miles, so it would have been quicker to run, which she’s doing tomorrow by the way. She also hits the swimming pool, it's not long until her next open water swim, if it’s on.... Then she manages to find some room on the prom where she waits for us. This must be the lull before the evening rush, although it’s still heavily congested with orange shirts, mainly XXL, with Wonga on the front. Blackpool FC are clearly at home and doing far better today, a 5-0 win, than Derby, a 4-0 loss. 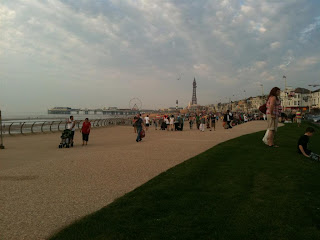 We don’t even attempt to do the sights tonight and head inland instead and find a decent pub about a mile in, with a good choice of beers and half decent food. Still a few orange shirts around but less tourists and no karaoke. 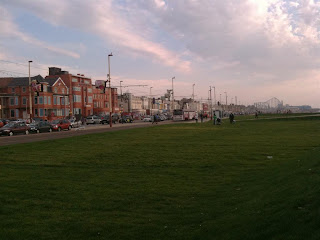