On the bike this morning I manage to dodge several manic motorists, a few feral pedestrians and a speeding antelope doing twice the speed limit. Well, perhaps not the last bit. That was someone else wasn’t it, South African mountain biker Evan van der Spuy who got knocked off his bike by a charging antelope. He was mid-race at the time, so it must have really pissed him off.

L reckons/hopes that one day a stag in the park will do just that to motor mouth MD. Ah, she was only saying the other day that he was always calmer the morning after dog class (e.g. he’s knackered) but this morning he disproves that theory.

I have the afternoon off to amuse motor mouth, and Doggo of course, before we head off to the beer festival this evening. I do so on the park. Doggo's first visit with his ball since his operation.

Nottingham’s Beer Festival has long prided itself on offering the largest selection of real ales in the UK. These days they are claiming in the world. In the halcyon days of yore, when I regarded it as the best festival anywhere, they managed this with around 80 or so beers. These days, with the explosion of British brewing, that looks a bit piddling.

I do wish they’d reign it back a touch. With the 80, a seasoned festival goer like me could soon slash that by half by weeding out the ones they already knew, and then further down to about 15 or so, by removing the beer styles they didn’t like. Leaving just enough for two nights at the festival and space to fit in an old favourite or two. Plus if you found some new favourite among the selection you stood a fighting chance of tracking down somewhere that sold it. These days some of the breweries are so small and some of the beers so obscure that you have little or no chance of that.

In the old days those 80 beers were also ordered in sufficient quantity to last for the duration of the three nights of the festival, so even if you went on the last night you’d have almost the full range to aim at. Not so now, hundreds of those brews won’t even make it through the first night. In fact around 300 or so aren’t even on sale tonight and are being held back for when others run dry. So they’re only actually running a festival selling 600 or so beers at any one time, still impressive but not quite what they’re claiming. 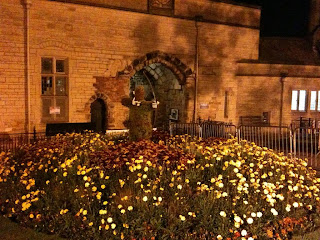 Quibbling about the beer aside it’s always a good night and this year is no exception. Once again held in the grounds of Nottingham Castle and for the first time they are selling beer by the ‘third’ which appeals to L, while I stick to the tried and tested traditional technique of halves. We also say hello to the ‘mini-token’, half the size of the previous tokens but of lesser value too. A third of beer costs two mini-tokens and a half pint costs three. The system works well, once the staff got the hang of it. I had to rip one ‘full size’ token in half to convince the barman it was two tokens! As this was several hours in, I hope he had only just come on duty and therefore hadn’t ripped anyone else off.

With so many beers you have to have a method of weeding down the numbers, so I went for anything with the word ‘coffee’ in the description! A tactic that had mixed results. Meanwhile L’s policy of anything with a 5 on the front of the strength, never seems to let her down. 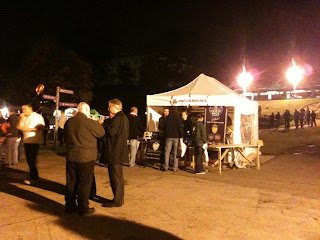 The beer of the festival, and this was not a thorough survey as we only sampled 18 of the 950 between us, went surprisingly to Castle Rock’s Midnight Owl. We’re not often great fans of our local brewery but this appeared to be darkened version of their Screech Owl and it was simply superb.