Nice Work If You Can Get It

L’s at the gym, despite the fact that the Daily Mail has been issuing dire warnings about exercising in the morning. Although it’s wise to ignore most things in the media and everything in the Daily Mail.

I do actually find running or cycling much easier after work than before. Not that that’s any indication of whether it does me any good or not. One thing’s for sure, that driving to work is bad for my stress levels, as well as doing nothing for my health.

Just to make sure, L goes in the evening as well, with the Daily Mail’s approval.

I meet her there later and we do our pre-drinking, before we hit town, in the leisure centre. We’re on the hard stuff, vending machine mocha. You can’t beat it.

It’s all happening a bit early tonight, at 8.40 Southend's The Horrors quietly shuffle on to the stage at Rock City unaccompanied by any backing music. This is after a venue change from what was supposed to be an intimate Rescue Rooms night, due to them selling that out rather quicker than expected and it’s not far off being a sell out for a second time in the bigger venue.

Then we’re quickly in to ‘Changing The Rain’ off their new album ‘Skying’. It’s a rather ponderous track and sounds ever more so live but from there, things soon pick up. ‘Who Can Say’ from their award winning ‘Primary Colours’ album is much better. Livelier. The same album also probably producing the highlight of the set, a terrific ‘Scarlet Fields’. The new stuff is less impressive but ‘I Can See Through You’, ‘Still Life’ and particularly ‘Endless Blue’ are decent enough but lack the class and the punch of their predecessors. 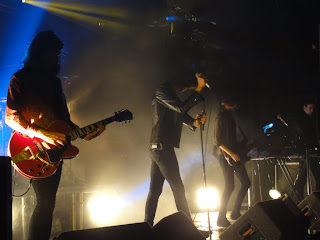 Throughout, the band beaver away industriously behind a fog of thick smoke and assorted coloured lights. Faris Badwan says little, although he does mumble a few things that we don’t quite catch and introduces some of the tracks. 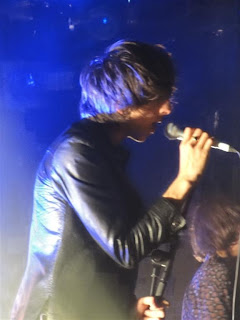 Then at 9.20 they’re done. 40 minutes and 8 tracks after hitting the stage they’re gone. Perhaps they were just the support... Actually, it’s really a bit pathetic; three albums to pick from and they can only muster the energy for eight tracks. If I’m making excuses for them, then maybe, just maybe, it’s because he’s been suffering from an infected throat, which caused the band to cancel a couple of the dates on this tour, but his voice seems fine tonight, so maybe not. Still, it was good while it lasted.

There then follows a longer than necessary break before the encore and I can't imagine why they need a lie down after that brief performance. That’s assuming we’re going to get an encore. Ah, I see we are. 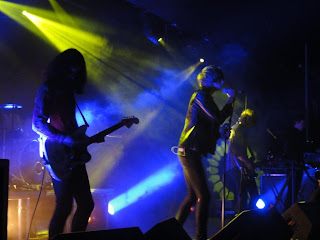 The encore showcases what was great about ‘Primary Colours’. ‘Mirror's Image’ and ‘Three Decades’ back to back are a potent combination and go some way to alleviating the disappointment of the brevity of the main set, but then it all finishes as ponderously as it started. The band busily jam away to ‘Moving Further Away’, which to me is all intro and no song. It’s musical Horlicks. I'll sleep well. It’s also almost as long as the main set. Midway through it, as nothing much is happening on stage, someone chucks a full pint at the bass player and then Faris himself lights a firework centre stage but I’m still nodding off. 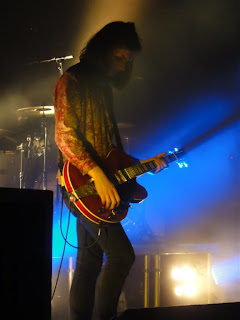 It sounds like a longer ‘Whole New Way’, one of the many tracks they've now discarded. There’s nothing from ‘Strange House’ tonight, unsurprising but still a shame. It would have been a test of how good they are to see how well they could weave say ‘Gloves’ or ‘Count In Fives’ in to the set. Tracks that would fit, at a shove. 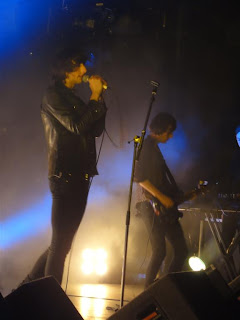 The length of the encore means it’s just over an hours toil for the lads. Nice work if you can get it. Eleven tracks in all. On the ‘Primary Colours’ tour in 2010 they played fourteen songs when they came to Nottingham. So they're regressing, shaving three songs off their set list. So don’t arrive late when they next tour... or you’ll miss ‘em totally.

Somebody somewhere is giving them bad career advice. The mumbles from the crowd heading for the exits is mixed at best. It was very good in the middle though, while it lasted.