I drop L at the bus stop at 6:45am with her stress levels reading ‘red’, which is more to do with having to rely on two buses turning up on time and to dovetail together rather than the race itself. The first bus doesn’t even appear on the electronic signs. Some buses do, some don’t. It’s nothing to do with it not being a council bus and the signs being provided by the council of course. Thankfully it is on time, as is her coach to Sheffield. So stress levels falls a little to a kind of deep amber.

While L heads north, I head south to Peterborough, where the weather seems to be fining up after the early rain. In fact it turns out to be another sunny day, at least at the Peterborough Showground.

Up in Sheffield, L claims to be on the front row, of the second batch of starters but even so, that’s nosebleed territory. I’m so proud.

Meanwhile MD continues to frustrate. Beautifully clear for half his first run then a pole goes down, he misses his weave entry, then comes out the damn things completely, twice, then for good measure two more poles down. Faults wise it’s a cricket score and the judge will probably sue us for injury caused by overuse of his arm signalling it all to the scorer.

Second run. MD picks a course with the weaves not only as obstacle number two but also set on the diagonal (which incidentally should not be allowed on this level of course) to release himself before I'm ready. I recover the situation, just, and we storm round clear, yet having wasted several seconds unnecessarily faffing around at the start. We come 19th and oddly get a rosette for that.

So not a great day so far and it's only 11am. Then we sit twiddling our collective thumbs and paws until MD’s final run comes around at about 4pm. I spend some time chatting to the wild life, at what is actually a county show type event. 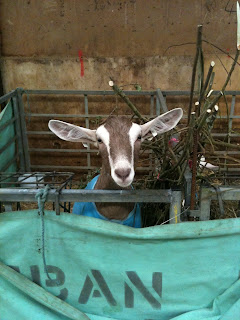 Then to cap it off a lovely clear from MD on our final run is not ruled lovely by the judge who gave us 5 faults for a see-saw contact that we definitely got. Clearly the judge didn’t agree and he’s entitled to his opinion but then I was a lot closer than him and had the better view of me making sure MD got it. Unfortunately it’s his opinion that counts. We would have been 5th, which wouldn’t have been bad but at least he hasn’t done us out of a win.

Meanwhile Doggo, whose been banned from competing today by the vet, has been ambling around all day, soaking up the concerned attention of everyone and generally having a sniffing good time.

Up in Sheffield L does another 57 minute 10k, so she’s getting very consistent. Now we need to work on getting her to break into the 56s. Her rival for the day is a mere four seconds behind. Blimey. Close then. No wonder she’s straight on the Abbot afterwards as she meets Daughter for lunch.

In the evening it’s my turn on the Abbot as she consoles me in the local.