I continue my half marathon training by bike.

L has the day off with the boys and has the ordeal of taking them on the park for the first time this week. Which entails much sniffing and weeing to catch up on.

Interesting news in Mansfield with them planning to reopen the Mansfield Brewery. Bet they wish now that they hadn’t demolished it three years ago. It sounds like a good idea though. I don't think there's even a micro brewery in Mansfield. I was going to say what they really need to do is get the Mansfield name back from Marstons, the ones who stole it, but it appears they've already thought of that. 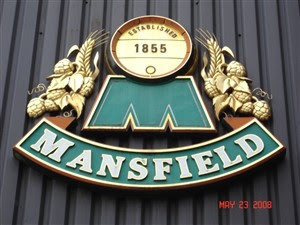 The vet calls with Doggo's test results. His lump was benign, just a mass of overgrowth of collagen and fatty cells. Which means little to me but it's obviously excellent news. Now who’s going to tell him he didn’t need to have the operation.

We celebrate by leaving him at home, still convalescing obviously, and going to the Goose Fair because L says she’s never been. 717 goose fairs and she’s never been? I can’t believe I’ve never taken her but I’m happy to oblige tonight. I went a few times in my younger days but it wasn’t me then, less so now.

One thing’s for sure, it’s got bigger. It now takes over the whole of the Forest Fields site and even spills over into the local streets, which didn’t used to be the case. It's actually nice, in a ‘it’s nice to have a big festival’ sort of way but it’s still not for me.

There are certainly more rides than ever before, over 500 apparently, and even more evil ones than before. Were they really swinging people around in a ball thing on a piece of elastic, fifty plus metres above the ground? Although what seems to account for most of the size increase though is the increase in food outlets from which the smell is not that appetising at all. A kind of burgered candy floss aroma prevails.

It’s also all terribly terribly expensive but this doesn’t appear to be stopping people. Recession? What recession? It stops us though, that and fear. We move on through the attractions onto Mansfield Road and the bars.

First the Forest Tavern and then the Lincolnshire Poacher where Woods Wonderful from Shropshire is accordingly wonderful and much cheaper than a ride in a bungee ball.