Football on the park this morning with the dogs, using the deer pretty much as goalposts. The females will insist on flaunting themselves in front of MD for some reason.

Then it’s the match, where Blackburn show to be possibly the best team we’ve played and only some inspired goalkeeping keeps the half time score down to 1-0. Second half is better, although you would still have to say that the late goal salvaged what was really an undeserved draw.

Then I get the train up to Sheffield to meet a hobbling L, who cut her foot painting. Yes painting, another dangerous hobby.

We meet up with Daughter who is now working for MI5, student style, but if I tell you any more I'll have to kill you. In fact I don't know any more myself. We eat at the Old House and ply Daughter with expensive cocktails (are there any other kind?) to loosen her tongue but I just end up having too many Stouts and Porters. 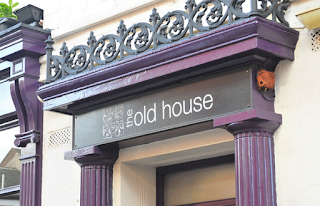 The beer washes down their excellent but arty food. I order some Lamb Sweetbreads, which is apparently off cuts or offal or entrails or testicles or something like that. Had to be tried...

Then a nightcap or three at the Sheffield Tap, worth deferring our planned 9.30 departure for a hour.