It was a bit of a cold night in the tent but we’re hardy types. Well, I am.

The problem with an evening race is what to do doing the day. It’s an absolutely glorious day for walking but hitting the fells and yomping up a peak wouldn’t really be the best preparation for a good race this evening.

For saying we know the area pretty well, we have some problems finding Grizedale Visitor Centre. My mistake is probably to try and follow the race organiser’s directions, rather than a map, road signs and common sense. We get there and acclimatise ourselves with the forest and the course, which is already marked out. As we walk the first part of the course we find it horrifically uphill and treacherous, at least when attached to a dog.

Then we go pick up our numbers, don trail shoes and I introduce L to her head torch. I hope it works. It should, as it’s fresh out of the packet.

So the Petzl Nao Pitch Black Night Run. All three run distances, that’s 5k, 10k and 20k start together at 6:00pm, by which time the light is fading but it’s far from ‘pitch black’.

In fact I leave my head torch off for the first ten minutes, conserving battery power, not that I should need to... but just in case. Even when it gets a bit darker there still no need for it, as I can see where I’m going in the light of everyone else’s. When I do turn it on it seems to make running across the rocky terrain easier than in the daytime, the light illuminates the rocks making it easier to avoid them.

The head torches also pick out the reflective arrows which way-mark the route. So it’s almost impossible to get lost despite the darkness, unless you’re like L and take directions from a marshal on a bike, who sends her the wrong way. 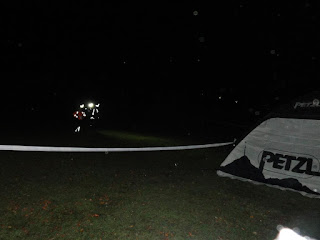 I quite enjoy it, the hills aren't as horrific and treacherous without a dog, there’s even a water station. I continually catch and overtake people on the up-hills and the flats but then plummet back down the field on the downs.

My time of 53 minutes is not bad considering the terrain, the dark and the dodgy knee. Which is sore throughout but bearable. L is 20 minutes behind me and seems to have enjoyed herself.

We don’t get a lot for our endeavours. Just a bottle of water, a Cliff bar and the smug knowledge that we’re donated to The MS Society. 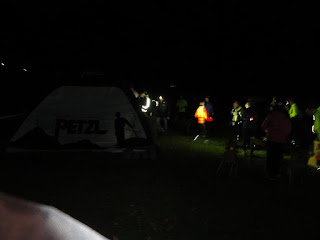 Time is getting on if we want food, so we leave before the 20k runners come in. Realising it’s a good job we didn’t opt for that distance ourselves.

We eat in the Wainwrights at Chapel Stile where they usually have Snecklifter but not tonight. It must be a conspiracy. Then we head to the Old Dungeon Ghyll where thankfully they can he relied upon to have the Old Peculiar on.