It’s miserable and drizzling with rain first thing, so I don’t bike. Predictably by around 10am it's lovely and sunny, although still windy. Getting windier by the minute as well.

This fifty books idea isn’t going away. L does hate being out-challenged and is probably already designing the celebratory t-shirt in her head. Reading fifty books would be the reading equivalent of doing an Ironman and how would she fit all her other hobbies in?

Time to escape. I leave L contemplating eating her tea one handed, a book in the other. Quite where she will have her knitting needle, paint brush, MD’s ball... I don't know and I hope she doesn’t forgot to run her daily 5k....

Meanwhile, I'm making my way down to the Rescue Rooms where, blimey, there are four bands on the bill. It's practically a festival.

Bitter Strings are a local Nottingham three piece who claim to be influenced by 60's rock music. I can’t see that. Pretty standard stuff if you ask me. There’s a little bit of Alex Turner about lead singer Ben McConnachie but it’s often drowned out by the driving bass and drums. A work in progress no doubt. Their best moment is a track called ‘Wonder In Our Eyes’, which McConnachie tells us is a new one before adding the afterthought ‘well they're all new if you haven't seen us before’. There’s promise in that track, if that’s the direction they’re going. 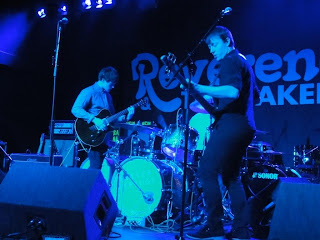 Next, hang on its ‘From The Jam’. Oh. That's not Bruce Foxton. Twisted Wheel you say? The name seems familiar. Oh that Twisted Wheel. I've seen these before haven’t I? Weren't they supposed to be the next big thing about five years ago, got a support slot with Weller by mimicking Weller? Twisted Wheel released one album back in 2009 and their second album 'Do It Again' is just out, although guitarist/lead singer Jonny Brown, looking very Weller-like if I may say so, is the only constant between the two records.

The sound, punk-by-numbers guitar tunes, remains the same and clearly they remain popular. Lively but nothing special, it is only when they find out they have a mere five minutes left, that they step it up, with some older tunes I assume. Actually I make it less than five minutes, more like minus five. They play for ten. One more track? Why not? Curfew? Pah. 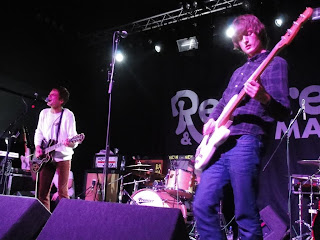 So now were behind schedule but Danny Mahon comes straight on. This is a first. I've never seen the previous band packing up their gear around the current band whilst they’re playing on stage. It’s all happening tonight. Mahon and his acoustic guitar are here at the personal invite of Jonny McClure to warm us up (some more?) after which, he says, he’ll be joining the crowd and going mental with everyone else whilst the Rev is on. His angst-y songs are pleasant enough and have catchy titles like ‘I'm a Twat’. You get the idea. Bob Dylan eat your heart out. He's a laugh at least. 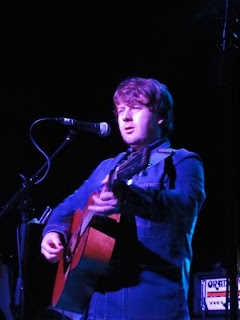 I've been waiting a long time to see Jon ‘The Reverend’ McClure. Whenever he plays locally it seems I've already got tickets for something else. So here I am, finally, and surprisingly it's only the Rescue Rooms. Perhaps his star has fallen somewhat, then again, it's a packed to the rafters Rescue Rooms that is jumping, literally, from the off. The off being 'Bassline', for which the Reverend’s gone rave, a hallmark of and a departure they’ve taken, with their new album.

Oldies ‘Bandits’ and ‘Open Your Window’ remind us that the Makers are fundamentally an indie band and are at their best when they are in this mode because ‘Warts n All’, a song about people on Facebook, just doesn’t really cut it.

This is, though, typical of the sound of the new album, which is appallingly named ‘@reverend_makers’ for the hashtag generation. This begs the question, should that album stand the test of time over the next ten years or so, will Twitter? Will they have to stick a label on it explaining what Twitter was? Bad call, IMHO. 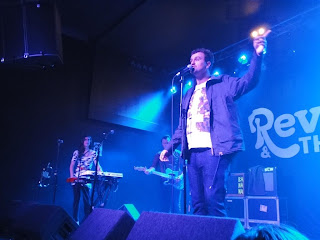 The album itself is a patchwork of good and bad, and it doesn’t help the bad when you follow it with corkers like the ‘State Of Things’, the title track of their brilliant and witty debut album. Now, as McClure states, things have properly got going. Indeed. Until ‘Noisy Neighbour’, an ode from a Wednesday fan to those across Sheffield at United, keeps the momentum in check. 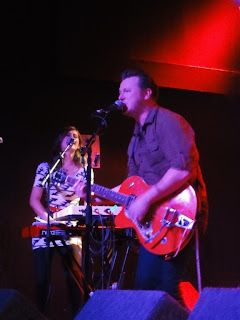 The set is drawn primarily from albums one and three but ‘No Soap in a Dirty War’, probably the standout moment on ‘A French Kiss In the Chaos’ surfaces. This is more like it, lyrically stronger but it sadly doesn’t seem quite as focused tonight as it is on record.

‘Sex With The Ex’ is the moment of the night. McClure stripping the band down to just him, his guitarist and his wife on keyboards/blow thingy. Yes, it’s always handy when you can bring the wife along, though perhaps not very rock n roll. She’s the effervescent beauty behind the keyboards by the way, in case you haven’t noticed. 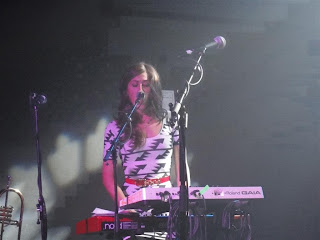 The ‘hit’ ‘Heavyweight Champion of the World’ follows and weaves an unlinked path, that I’m desperately trying to link, from boxing to wrestling and ‘The Wrestler’, a new track which is more like a traditional Rev song, via ‘1+0’ and ‘Miss Brown’

The Rev loves to criticize Radio 1 but, call me cynical, the new album seems to be an attempt to get airplay. There’s hooks a plenty but little substance. The focused subject matter of their first two records seems to have gone in an effort for sales but tracks like ‘Out Of The Shadows’ are just twee, an aerobics class workout track, something he might have written for Britney. 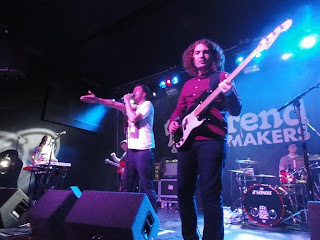 We finish with some highs. ‘He Said He Loved Me’ is energetic and the band are animated in their delivery of it. When the vocals are dished out around the band, as they are on a few tracks, it brings added life to the show, making you not just focus on McClure himself.

Not that McClure isn’t worth focussing on. He’s a performer, I’ll give him that, and banters continually with the crowd. Not really an enigmatic one but he’s the boss nonetheless and his crowd love him.

Then finally ‘Silence Is Talking’ closes the set, from that difficult second album. A set that, at 19 tracks, may have outstayed its welcome a little but in general it’s a good fun gig. A party as McClure would say.

Do they still do an encore in the car park?

‘Outside in 2 minutes’ he tells us. That’ll be a yes then.

The encore, performed on the steps of Nottingham Trent University’s Newton Building in the rain with Danny Mahon and the chap from Bitter Strings assisting is good, if disorganised. Tracks such as ‘Hidden Persuaders’ and ‘Sundown On The Empire’, Britney again, would have been better in the main set at the expense of some of the newer stuff but when you’ve got an album to promote you’ve got an album to promote, haven’t you. 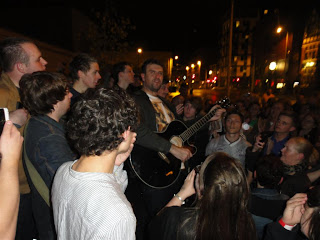 ‘Sundown On The Empire’ is cut short and morphs into Bob Marley’s Jammin' but by now his heart isn’t in it. He hands his guitar to the chap from Bitter Strings who, after some debate about what to play, attempts a cover of ‘Blue Moon’ much to Danny Mahon’s disgust.

Meanwhile the Rev poses for some photos with his public before grabbing his guitar back and diving into a waiting car. Which speeds off in the wrong direction, stops, turns around and speeds off again in the other direction battling against Nottingham’s one way system in an attempt to find a way back, one would assume, to the stage door. They’re probably still driving round now.