Bring On The Westies

I found out last night whilst checking their website that Nottingham’s smallest and in fact the world’s smallest (check the Guinness Book of Records) cinema is no more. The Screen Room, in Hockley and just across the road from our favourite cinematic haunt Broadway, had been closed over Christmas but now will not be reopening. 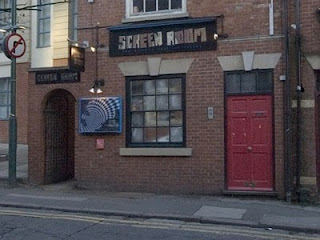 I'm on their mailing list but they didn't tell me, either that, or they tucked it away at the bottom of their last email and I didn’t see it. Well, at least I suppose it was a fitting low key end for a low key sort of place. The cinema was a mere 15ft by 15ft, had one screen and just 21 seats. Because of its size, the projector was behind the screen, unlike in a conventional cinema.

According to the manager there, their nine year lease had simply come to an end and they chose not to renew it. ‘Time to move on!’ their website says. They leave the place on their own terms and debt free. So if anyone fancies taking it on, despite its smallness, it appears to be a going concern.

Oh and if you’re missing an umbrella, give them a call, apparently they have at least thirty of them in lost property.

The place will be missed.

L is out an age with the boys this morning. I think she’s giving them a good long walk but she returns complaining of Doggo dragging his paws... sniff, sniff, sniff, goodness knows what he sniffs at but it must smell good. MD of course was just looking for something to yap at. Bless him. He’ll be in top vocal form for his return to training tonight.

Vocals aside his training goes well, all I need to do is find an event for him, after having had to miss yesterdays event. I need to make the most of it because we’ll be transferring from Collies to Westies soon, so I’m told. I don’t much fancy agility training a Westie.

L is out on the razz in Derby and we pick her up on the way home.