You Know Who Is On The Bench

The dogs don’t get a park session this morning because first I have the opticians and then an early match. Derby v Forest has needlessly been moved to a 1pm kick off.

I’m not optimistic but at least we have everyone in their right positions for a change and they’ve left out that bloody Earnshaw. Unfortunately, you know who is on the bench, so expect a late winner.

The game is not a classic which I suppose means we do better than I expect. It looks like a 0-0 but it’s also all set up for someone to come off the bench and win it... and here he comes.... and there it is... Derby 0 Earnshaw 1. Typical.

It’s the rescheduled Bolsover 10k tomorrow. Fast and flat it says, although this is usually a lie. All the same I decided I ought to take it seriously. Well that was my thought when it was originally scheduled in December. Tonight, just the one drink while we watch a film about ballet, Darren Aronofsky’s Black Swan.

Thomas Leroy (Vincent Cassel) is the artistic director of a New York ballet company. His latest project is a new production of Swan Lake for which he promptly forces his star ballerina Beth (Winona Ryder) into retirement. 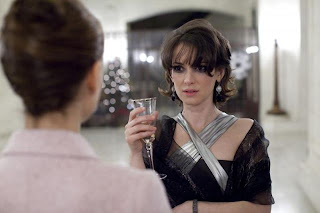 Boo hiss, always been a Ryder fan. You’re too old love. Her replacement in the coveted role of the Swan Queen is to be Nina (Natalie Portman). Boos turn to cheers over here. Always been a Portman fan. 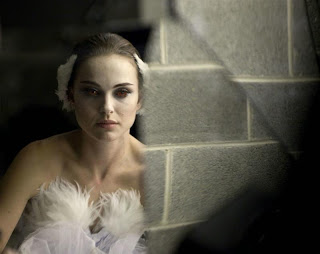 Ryder is so distraught, that after insinuating just how down ‘n’ dirty Miss Nat P had to get to land the role, chucks herself under a car. Of course our Nat, well I best call her Nina, wouldn’t do any such thing, she is the White Swan personified, a real goody two shoes.

Let me explain and give you the idiot’s guide to Tchaikovsky’s Swan Lake... Evil sorcerer turns pretty young girl into a white swan and she can only be turned back if her prince swears eternal love to her. Evil sorcerer though has dirty trick up his sleeve, he invents an identical black swan who he sends to seduce the prince and divert his affections. You know how easily men are swayed.

As Swan Queen, Nina has to play both swans. The good, sweet, innocent White Swan as well as the wanton black one. Nina has all the technical ability to dance the White Swan dance but the director seriously doubts her ability to capture the brazen sexuality of the Black Swan.

Enter the rather fetching Mila Kunis as Lily. 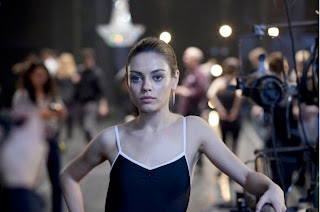 Mmmm. Move over Ms Portman, slowly. I’ve suddenly become a Kunis fan. Nina finds the self assured Lily totally incomprehensible. She’s the sort of a girl who dabbles in all sorts of naughty pastimes, such as fun, as well as drugs ‘n’ alcohol, and carries her knickers around in her handbag. Nina feels threatened by her, more so when she finds out she’s to be her understudy. Lily has the all the sensual blackness that Nina lacks, she is the Black Swan immortalised, at least in Nina's eyes. Oh and she even has black feathers tattooed on her back. Subtle? Not.

Somehow Nina must find a way to evoke her inner Black Swan. Thomas tries to provoke and manipulate her into the role, demanding that she live a little and be less 'white'. He kisses her, she bites him, he’s impressed, and she gets the role. 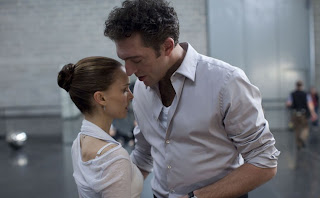 Nina tries hard to live the role but still struggles to discover her dark side. The stress begins to tell on her and she starts to have delusions. Thomas, getting sleazier by the frame, takes her back to his place, for what we assume is an education in sleaze. Though you suspect he’s going to seduce her more for his own ends rather than just for the sake of the production and that she'll go with it for the role, as Ryder implied and maybe did herself, but that's not what happens. He sends her away with 'homework'. Homework she throws herself into with abandon (nice technique Nat), until she realises her mother is in the room.

Ah yes, her mother, Erica (Barbara Hershey). She too was once a ballerina but gave it up to raise Nina and now lives her life through her daughter. Always pushing her to be successful, whilst sheltering her from the world. She has raised an insecure young woman who looked fragile from the opening scene.

Nina’s hallucinations grow. The scratch marks she inflicts on her shoulder, yet we never see her do. She tears a piece of skin off her finger, ouch, but then realises it didn't happen. Her reflection in the mirror moves on its own... Nina becomes increasingly unhinged and before long she can barely distinguish between what is real and what isn’t and nor can we.

Enter again, the black haired temptress to lead her further away from reality. Lily takes Nina into what is probably uncharted territory, a bar and a night club, where Nina is so uptight that Lily offers her a drug to lighten her up. 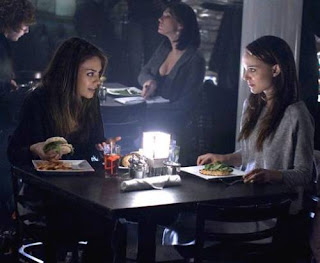 Tugged along by Lily, Nina has a few drinks and the two of them indulge in an alcohol and drug fuelled night of clubbing and flirting with a couple of chaps called Tom and 'Jerry'. Then she takes Lily home and to bed, at least in her mind, via an argument with her mother. They lock lips, in several configurations, as Nina embraces a more lustful version of herself. Nina wakes up the next morning, alone and late for rehearsal where she finds Lily in her costume, dancing her routine, fresh from spending a night with Tom.

With so much pressure being exerted by her director, her mother, her rivals and herself, Nina continues to buckle under the strain. Becoming more and more obsessed with the role and the role takes her over. Aronofsky takes his audience inside her deteriorating sense of reality, making sure we see what she sees, we experience what she experiences. It is intense stuff.

It may have been her mother's paintings moving and talking to her that caused her to fall and hit her head. She comes round, in her own bed, on opening night to find out that her mother has called her in sick... mothers don't you just love ‘em.

When Nina finally gets to the theatre and performs, things don’t go that well. Lily is still up to her tricks, flirting with one of the male dancers. Nina loses her concentration and falls. The girls argue in the interval and fight or is Nina fighting with herself? Are these two girls actually two halves of the same person? Is Lily even real?

Whatever happens in that dressing room, Nina comes out and dances the Black Swan with the sensuality that Thomas has been asking for all along. She leaves the stage to rapturous applause and kisses him passionately, finally having seduced him with her dancing.

Then in the final scene of Swan Lake, as the White Swan commits suicide, perhaps we finally realise what is real and what isn’t... or perhaps not.

Either way, it’s a brilliant piece of filmmaking. An enthralling experience from start to finish, something you would not expect from a film about a ballet. So perhaps the Kings Speech isn't the best film of the year after all. As for Portman, does she deserve the plaudits she’s been getting? She’s always been easy to look at but as an actress, the jury was out. In this though, you have to admit she was terrific. Best film, best actress, best director... maybe, we have a few more to see yet.