I finish work at lunchtime, as we’re off for a weekend in the Lakes later but first I get sent into Derby to pick up some wool. Yes wool. The things I have to do. I have to face several difficult questions about what sort of wool, what it was for, etc etc. I thought wool was just wool although obviously in different colours. And what was it for... err knitting... it’s not much good for much else, such as tying people up, if that’s what they were thinking I might be up to. Luckily L had briefed me, a little.

We get home, pack and pay a tearful goodbye to Daughter. Well sort of, I figure that things are going to be going on once we’re gone that we are glad we won’t be a party to. The clues in the p-word. 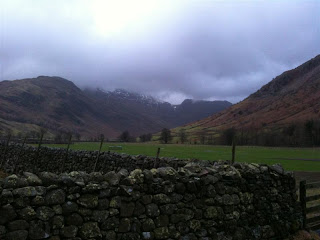 We arrive at our cottage which is very pleasant and as we are there before our friends we blag the best room. We seem to get away with this, even taking into account the storage heaters in their room don’t seem to have been switched on and it’s a tad chilly. Theirs in fact appears to have once been the garage, though now a tastily converted one I hastened to add.

Our friends are happy though, we have wi-fi. Well we did have wi-fi until MD arrives and takes aim at the power sockets. He misses and wees up the living room wall. Oops. Hasty mop up job and no damage done. I think.

I had my doubts but, to be honest, the wi-fi does appear to be useful. We can keep in touch with Daughter via email as mobile reception isn’t readily available here. This is better than the previously tried and untrusted method of going to the local pub, standing on one of the tables outside and waving your phone in the air until a text goes. So at least I can look a bit saner this year.

It also means the pub can be used for the exclusive purpose of drinking and eating. I can report that the Cumberland ale was very good but the Snecklifter, well, simply superb.

All washed down each evening with a night cap from the reindeer selection pack from Milestone Brewery that our friends brought.

I think I had 'Dasher The Flasher' or something like that but it’s all a bit hazy after the Snecklifter.