It Would Make A Nice Bookshop

I was hoping today would start warmer than yesterday so that I could cycle. Nope. -3 yesterday, -5.5 this morning. Ouch. Cold. Nothing for it but to run. Later. I'll run after work. I put on my kit and go for the bus but I end up running to the bus stop because I was late. I still missed the first bus, the second one was late and then it got stuck in traffic, so I then had to run to work from Derby and I was still late. So I’ve had quite a workout today already.

Nottingham’s ‘Tales Of Robin Hood’ which has been closed for some time is to become a Tescos. 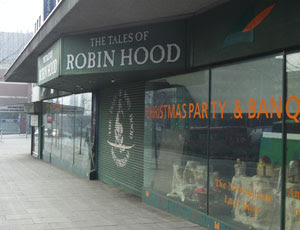 Wonderful. Just what we need is another Tescos. As L is fond of saying, ‘If I stood still for long enough I'd become a Tesco’ or a Sainsburys... The old Dillons/Waterstones building in the centre of Nottingham is now going to become a Sainsburys. It’s a lovely old building. It would make a nice bookshop.

I run home, partly, and then walk up with the dogs to meet L from the gym. Then we dump the boys and revisit one of our locals, the Wheelhouse, that we ventured into for the first time for ages on Boxing Day. It now has bouncers on the door. Odd for a suburban local, though it’s clientèle perhaps aren’t the most salubrious. Well, we're in there for start. Pleasant evening, even if the Special Reserve is no longer on. At 6.5% it was probably for the best.