I see a car in hedge on my way to work. So I park the bike up and take a photo. It was an impressive bit of parking. 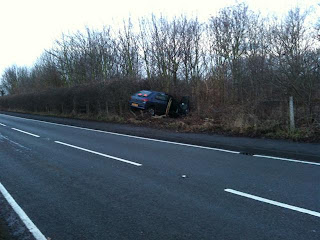 The Oscar Nominations are out and are pretty much what we expected, although I’m gutted for Mila Kunis, who didn’t get a best supporting actress nomination.

The weather seems to get windier and windier throughout the day and by the time I come to cycle home its turned into a full on head wind. Obviously it’s going to be against me.

Second attempt for Blue Valentine tonight and again it is sold out. Luckily I've booked in advance. Broadway are seriously coining it in this month.

So Blue Valentine, pretty small town girl meets nutter with a ukulele and he falls in love, whilst she marries him for convenience... kind of. Happens all the time, just without the ukulele. This nutter though, does appear to quite charming. Well I liked him, at first.

What follows is a kind of a weighty relationship study. Several years Dean (Ryan Gosling) and Cindy’s (Michelle Williams) marriage is failing. They both know its failing but they just haven't quite reached the endpoint yet. He seems to want it to continue, she doesn’t. 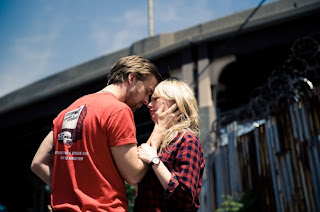 The story of everything falling apart is told in parallel with the story of them/him falling in love. See I’m not convinced she ever loved him. We see how they met and how they fell for each other. In his case at first sight. In her case after he stalked her on the bus with a ukulele with lines like ‘In my experience, the prettier a girl is, the more nuts she is, which makes you insane’. She seems amused and sort of flattered that he can ‘compliment and insult somebody at the same time, in equal measure’.

He’s more nuts than she is though. Later he strums said ukulele in a shop doorway whilst warbling eccentrically the song ‘You Always Hurt the Ones You Love’, which should have been a warning to both of them, but it works, he pulls the girl and gets into her knickers. Which is impressively quick work until we find out that she’s had 'about' 25 partners from the age of 13. 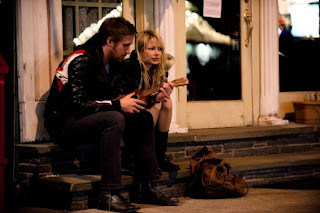 Dean doesn’t know this though, so it comes as a bit of a shock to him when she almost instantly announces that she’s pregnant. Not that it’s his of course but courtesy of the guy she’s been hanging around with before Dean.

When she goes for an abortion and we learn about her promiscuity, we wonder why it’s taken her so long to get caught out? It’s an abortion she finds she can’t go through with and aborts the procedure part way through. Luckily for her Saint Dean is all too willing to devote his life to the gorgeous girl he’s just met and her unborn child, even after getting beat up by the biological father. So he marries her and raises her daughter as she’s his own. 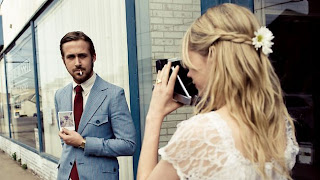 Back in the present, we see their relationship deteriorate further. Cindy is stressed out, overworked and claims to be raising her husband along with her daughter. He meanwhile still appears to be infatuated with her and puts up with more rejection than most people could stomach but for her, it’s clearly already all over. Cindy notes early on that her parents very quickly fell out of love with each and wondered how anyone can trust their feelings when they can just disappear like that? It’s like she was waiting for it to happen.

Yet he still tries to breathe life back in to their relationship with a perhaps ill advised and ill timed trip away to a motel for a night. She's not keen, not keen at all. Especially when it turns out the room they book is a futuristic themed room that looks like the inside of Dr. Who’s Tardis or as Dean describes it a ‘robot's vagina’. Perhaps romance died then. 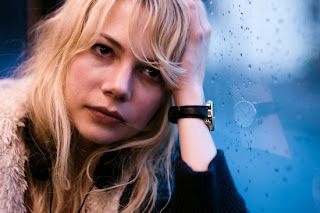 Perhaps because I'm a man I look at Dean and wonder what it is that he did wrong. I felt sorry for him; on the surface he's done a lot for her but now she seemed to be out of gratitude and now more narked about what he hadn't done. Get a better job for instance. Although probably just so that she could afford to go back to medical school.

True, somewhere along the way, his character has changed. The nice guy started to smoke too much, drink way too much and become very short tempered. Here lies the problem with the film. Just when did this character change occur? When did their relationship suddenly go bad? There seemed to be a bit missing in the middle between the past and the present, a big bit.

Dean say early on about girls in general that 'they spend their whole life looking for Prince Charming and then they marry the guy who's got a good job and is going to stick around'. So perhaps he knew it wasn’t going to last. A better observation would have been 'don't marry someone you just met ten minutes ago and who is pregnant by someone else'.

Gosling and Williams are both very good in this, although only Williams got an Oscar nomination yesterday. The film itself, whilst a good watch, is flawed and nothing special, nothing we haven’t seen before, like say in Revolutionary Road. The film itself got a nomination in the now expanded list of ten Best Film nominations but if they’d stuck to the original five of old, I guess it wouldn’t have.