Doggo got a new football for Christmas and he’s like a puppy with a new toy. I’ve not seen him so animated about anything in years. Particularly not his agility competitions, sadly. Unfortunately our reborn puppy will be ten this year and he’s not really up to such shenanigans any more. Consequently he appears to suffer with a few aching limbs afterwards. I can sympathise. The same thing happens to me, when I think I can keep up with the youngsters in my 10k’s.

In the afternoon a rare victory for Derby at Preston is overshadowed by the antics of a duck. The duck in question being Deepdale Duck, Preston's mascot. 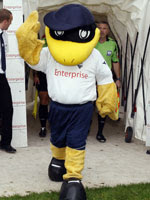 DD got in trouble for continually distracting Derby’s goalkeeper Stephen Bywater during the match. Bywater seem to complain to the referee who ignored his pleas at first, that is until the duck allegedly flicked two fingers at Bywater. The referee then requested that he be removed. Cue a couple of stewards trying to corner the duck, who was reluctant to be removed before finally he was marched down the tunnel and off the ground.

The duck has plenty of 'previous' but I won't go into that here.

We have a race tomorrow, finally, so we stay in but an intention to be AF doesn’t quite go to plan and quite a bit of wine is sunk. Which I shall regret if I’m down the field tomorrow.