It finally stops raining, so today we get to walk in the dry. Although, because we leave later, it’s probably not going to be as long.

We stick to the Langdale Valley. Out along the valley floor to Great Langdale, then up through an almost deserted campsite to Blea Tarn. To be fair the campsite was probably quite busy last night, as it always is, despite the rain but they will have packed up by now as its gone 2pm.

The rain has created all sorts of adhoc lakes. 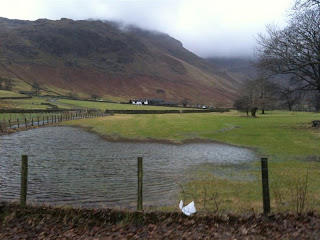 Doggo decides to disgrace himself and sees off a sheep. I thought he’d retired from that sort of behaviour.

We head round to Little Langdale where we consider stopping for a coffee at the Three Shires Inn but figure we ought to push on back before it gets dark as we intend to head across country. The pub is closed anyway, for renovation, as oddly was the Sticklebarn in Great Langdale.

Once we reach Elterwater we do stop, at the Britannia. Where’s L’s urge for coffee has turned into an urge for red wine, so I cave in too and have a pint. We can stagger back along the river from here in the dark no problem. In fact we just let Doggo off the lead and follow him, he seems to know where he’s going.

Yesterday L’s GPS watch didn’t last the distance and ran out of juice but freshly recharged today it clocks our walk perfectly. About thirteen kilometres today.

Back home Daughter seems to be having a good time without us. She’s needs to enjoy it whilst she can because she says we’re going to kill her for what’s happened to the lounge carpet. A whole bottle of red wine deposited on it apparently. Well it was an old damaged carpet anyway, so we’re not too fussed. So not really worth killing her over, but if she insists. Why not.

In the pub the Snecklifter is still going down well and I don’t know why I bother trying anything else but I do. Just for research purposes.