A Deathly Silence Of Disbelief

On park with boys this morning, taking it a bit easier with the new puppy... I mean old man Doggo.

At the football, Derby draw 0-0 with Millwall. After the match Robbie Savage gives a radio interview complaining about the booing. I think he’s exaggerating a bit; most of the crowd were asleep. He reckons the crowd booed when Stephen Pearson was brought on. I didn’t hear any booing; personally I thought there was just a deathly silence of disbelief but I do agree with him that the crowd doesn’t back the team enough.

Another film tonight, this time on DVD, ‘The Count of Monte Cristo’ based on Alexander Dumas’s classic tale. L says it’s one of the best books she’s ever read. So it’s sure to be a rubbish film then and consequently she hated it. So I thought I best do my research as I haven’t read the book, although I may now have to. To be fair, it’s a complex book that clocks in at 50 hours and 47 minutes on audiobook, which could probably never be perfectly transposed into a two hour film but... they probably didn’t try very hard. I guess the director and scriptwriter assumed most people have never actually read the book and they’d probably be right.

Edmond Dantes (James Caviezel) is a sailor for a shipping company and is engaged to a beautiful girl with the rather racy name of Mercédès (Dagmara Dominczyk), who rather appropriately everyone is quite keen to take out for a spin. 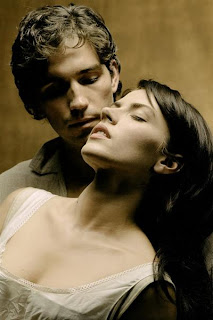 Dantes is set up by his friend Fernand Mondego (Guy Pearce), who is narked at Dantes being named the captain of one of their company’s ships but also sees the opportunity to acquire the keys to his Mercédès. Dantes is unjustly accused of treason, imprisoned and confined to life in Château d'If, a prison on a remote island. 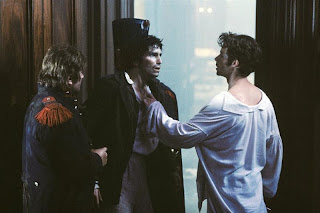 Once there his cell is tunnelled into by none other than Dumbledore (Richard Harris), well actually an old chap called Abbe Faria. Faria is trying to escape and they attempt to dig their way out together. They never manage it but Faria teaches Dantes many things and then on his deathbed fourteen years later tells him the whereabouts of a great treasure, which enables Dantes later to transform himself into the wealthy Count of Monte Cristo. Faria’s death also gives Dantes the means to escape. 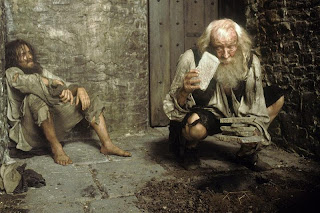 Once free, he clashes with the crew of a pirate ship and acquires the help of one of the pirates whose life he spared. Together they make plans to take vengeance on the men who were responsible for destroying Dantes life. 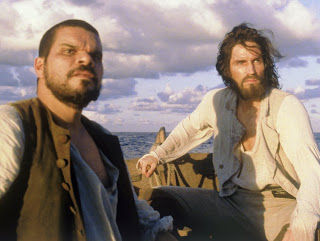 Fernand and Mercédès are now husband and wife, part of Parisian highlife and have a son. Dantes rescues their son from a fake kidnapping that he himself set up, in order to endear himself to their household.

Dantes gets his revenge on everyone; Hollywood manages to fit in a few swashbuckling sword fights before our romantic adventure film ends with the traditional made up happy ending. Dantes gets his girl and even gains a son, which will be news to Dumas. Someone ought to dig him up and tell him.

This was the tenth adaptation of the book and I suggest to L that perhaps we should watch a different one. She isn't keen. Thing is, bad or not, this adaptation has made me want to read the book, so it can't all be bad.

The movie is entertaining, more so if you discard the title. I guess like most adaptations, avoid if you’ve read the book.