My Poor Girl's In Need Of Some Attention

It’s a miserable day and L says it's one of those days when you'd rather still be tucked up in bed. I can’t disagree with that.

At work, our mice have moved on and munched someone’s headphones. I make a mental note to shut mine in a draw this evening.

At lunch time I take my bike in for a service. It’s around two years and five thousand miles since its last service. So the poor girl's in need of some attention. The shop give her a disapproving sideways glance but still take her off me. They say they'll ring me...

They ring back later and say it’s going to be expensive. Why did I know they were going to say that?

England are poised to beat the Aussies at cricket and in Australia. Their star man Alistair Cook, who’s been racking up the runs, reveals he’s keen to get the job done and return home to Floss... This sets the media off in a right tizzy. Cook’s girlfriend is called Alice but no one seems willing to ask him the obvious question about who Floss is. Has Cook put his foot in it and inadvertently let slip that’s he’s got a bit on the side waiting for him in Blighty? It’s so very odd of our media to be so un-prying.

Then the answer comes from England’s press office. Floss is his dog. Ahhhh. Bless. Well until it turns out it’s a bloody collie. They get everywhere.

The furore about Deepdale Duck intensifies, sent for the early bath against Derby at the weekend, as Sheffield United mascot Captain Blade comes out in support. 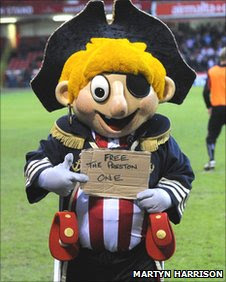 MD’s back at school tonight as dog training resumes after the Christmas break. He’s in good form and good voice.