A Move Towards Sexual Equality

This morning the 25th Bolsover 10k, which I have to skip a dog show for, due to a clash of dates after the rearrangement of the race which was originally scheduled to be run before Christmas. The race starts around half a mile down the road from Bolsover Castle from where they walk us down to the start. Last year it was called the Bolsover 11k... perhaps they made them run to the start or perhaps they just measured it wrong, like that race in Cardiff. On one I hand I would have preferred a more handy starting point but on the other, it would have been an incomparable distance with other races.

The dogs are banned from the grounds of the castle, so I found a nice quiet street to park them in. To my horror I find it is the same street we walk down to the start. Doggo is not happy and barks his disapproval. He’ll be even more unhappy when we run past him again on the way to the finish. Yep, I’ve parked the boys next to the course, with a perfect view of the last 200 metres of the race. Oops.

I’m late reaching the start because in a move towards sexual equality they have made the queue to the mens' toilets as long as the one for the womens'. Once line up, the veteran next to me tells me he’s done this race twelve times and tells me how good it is. He doesn’t mention the hills. This is another of these ‘fast and fairly flat with PB potential’ courses that are nothing of the sort. It has PB potential if you only ever run this race or hillier ones like Barnsley.

I’m slow but not as slow as at Edwinstowe. I can’t get close to four minute kilometres, so I have some work to do for the bigger races to come later in the year. That said it’s a pleasant enough run out.

The finish is down a track just outside the castle grounds. Last year the finish was inside the castle courtyard. There’s no explanation why it didn’t this year. A baffling decision by some official somewhere I imagine.

It’s the same t-shirt as the Chesterfield Spire 10, which they also organised, but obviously with a different race on the front. It’s ok but uninspiring. Oddly only 584 turned up despite the fact all 1000 places were sold, clearly other people had dog shows to go to.

We turned up at the cinema tonight to see Blue Valentine but despite it being Sunday and an early 5.15pm showing it was sold out. Nowhere else is showing it nearby, so I thought we were faced with a wait until the 8pm screening and a challenge to stay sober enough to enjoy it. Not so, L suggests '127 Hours' which she had previously assured me was definitely not on her radar, ever. Hmmm. I fancy it but I’m unsure as to whether I could get through it. I warn her I'll probably faint on her. We have a drink, debate it and then book tickets.

The film opens with Ralston packing his gear, but unfortunately not his Swiss Army knife, for a trek into Blue John Canyon in Utah. He jumps on his mountain bike and is off determined to traverse his route 45 minutes quicker than the guide book suggests is feasible. 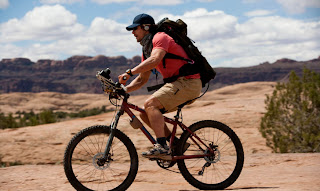 After a stint on his bike, he’s locks it up and continues on foot, running. It’s a fast moving start to the film and the pace doesn’t let up when he rescues two female hikers Kristi (Kate Mara) and Megan (Amber Tamblyn) who are lost. This, you get the impression, is the speed at which Ralson lives his life.

He spends time walking with the girls, showing them his beloved canyons and how to drop, rather scarily, into an underground pool, where they spend a while repeating the drop and swimming. 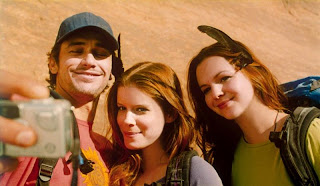 Then just as quickly he says goodbye to them and heads off on his own canyoneering. 'We did not even feature in his day' they say, disappointed. Before he departs they invite him to a party, look for the huge Scooby Doo they tell him, but they know he won’t show. Ralson is his own man. Little did he know that they could well have been the last two people he ever saw.

Then the pace slows down, as he takes a tumble, a boulder falls on him and traps his arm. He makes frantic efforts to pull himself free but gradually it dawns on him that he is stuck and this is where he will stay, and we will stay with him, for the next 127 hours. 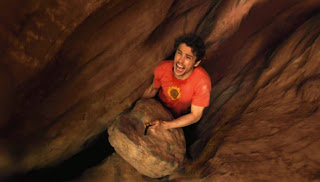 Ralston, being the sort of guy he is, had not told anyone of his plans and therefore assumes no one will come looking for him. It is just him, the boulder and a fight to survive. He starts chipping away at the rock with the only knife he has, a cheap one, ‘what you'd get if you bought a $15 flashlight and got a free multi tool’. It doesn’t help.

He spends the next five days eking out his water supply and when that runs out, he has to drink his own urine. Because this is Danny Boyle we get to see this from the inside of Ralston's water pack.

Ralston re-examines his own life, philosophises, battles the elements, hallucinates and even fantasies for the best part of four days. Some of it is real in flashback, some of it wishful and hopeful thinking.

Dehydrated and delirious, we see him wonder about the two hikers and there are also a few Scooby Doo induced illusions about the party he's been invited to. Whether this is the same party as the naked one he imagines in a people carrier I’m not sure.

He thinks about his ex-girlfriend (Clémence Poésy), who dumped him for being too self centred. His ex turns out to be no other than Fleur Weasley nee Delacouer, we saw her get married last year. These Harry Potter people get everywhere.

He also feels regret. Regret at not returning his mother’s phone calls and for not seeing enough of his family. Regret at not telling anyone where he was going. Whoops. He does a darkly humorous talk show style interview with himself on his camera admitting this failure. Then he carves his name, along with his dates of birth and death, into the canyon wall before videotaping his last goodbyes. 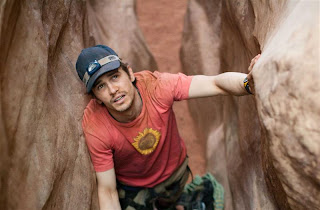 Throughout his time stuck in the canyon we have seen his life perspective change from being a total loner to suddenly include other people, his family, his friends, the two female hikers, even his ex. Together they have given him the will to survive.

Finally he decides he has the courage and the means to extract himself from his predicament, whilst we wonder what we would do if placed in similar circumstances. Problem is you know what's coming. You know how all this ends before you even step foot in the cinema, hence my partner’s initial reluctance.

Ralston starts to amputate his trapped arm at the elbow. First he snaps the bones because he knows he won't be able to cut through them. It’s enough to make you feel faint as it’s all captured painfully on screen. I tried to look away but oddly couldn’t. At which point I believe I blacked out. Oops.

Then without an arm, Ralson still has to abseil out of the canyon and walk out of the valley, where at least he gets to drink from a lake. Finally he encounters a Dutch couple on holiday who help him get rescued.

It’s a tribute to Boyle that he kept us engaged in the film for the length of Ralson's ordeal, the boulder incident occurs very early in the film, but he does. Once trapped, the film becomes a one man show starring James Franco and his facial expressions. Franco puts in a brilliant performance. The camera is right in his face the whole time and shows us graphically as the situation gradually takes its toll on him. In the end 127 hours turns out to be less a film about a man who cuts off his arm and more one about why a man cuts off his arm. It’s a performance that ought to snatch the Oscar out of Colin Firth’s hands but we’ll see.

Ralston survived and lived happily ever after but how many of us would have died in that canyon?

He now has an artificial arm, his real arm was eventually retrieved by park authorities and cremated by Ralston, who then went back to the canyon to scatter the ashes there.

127 Hours is an experience that I survived. I think. Unforgettable, for several reasons.

Time to put my head under the cold tap, grab something to eat, and get a stiff drink.