Not Quite A Full Elephant

Today we drive up to somewhere near Hull for a ten mile race known as the Ferriby 10. A race that turns out not to go anywhere near North Ferriby, which is its spiritual home and the place that gives the race it’s name. We are directed to a car park at a High School in a place called Cottingham and then we have to walk to the start in nearby Skidby but no sign of Ferriby. We line up to start in the shadow of Skidby Windmill. Well there would be a shadow if there was any sun, which there isn’t. It’s not terribly warm, around 2 degrees I believe.

A glance at the history of the race tells me that this race has been held every winter since January 1954 and originally started at Hull’s Costello Stadium before passing through North Ferriby en route but only eight years later the race was rerouted, avoiding Ferriby due to increasing traffic levels on the main roads. The race did though remain close to Ferriby until 1991 when construction of a new road rendered the race route unusable and the whole event was moved out to Skidby, where it remains today.

The fastest time ever recorded across any of the routes used is an impressive 48.01 by some chap called Brendan Foster in 1980.

I say it’s cold today but, of course, running was colder in the 80’s. 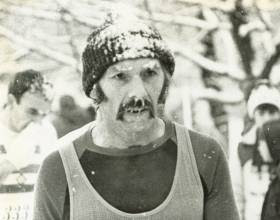 I hesitate to use the words ‘fairly flat’ to describe the course. Those words have been misused quite a bit recently but this course does indeed fit that description... if you start running from around half way. In fact it’s probably even slightly downhill from there. The problem is the seriously ‘rolling’ first five miles. Did I say ‘rolling’? Because it felt like almost constant uphill at the time. Oh and I’m forgetting the sting in the tail, a final uphill section back to the finish by the windmill.

At the finish I’m handed a very nice technical tee shirt with quite a striking design on it that tells me I’ve just ran more than seven lengths of the Humber Bridge or 2,200 African elephants, if that’s how you prefer to measure things, or even more bizarrely 126,700 sparrows. How the hell did they work that one out? 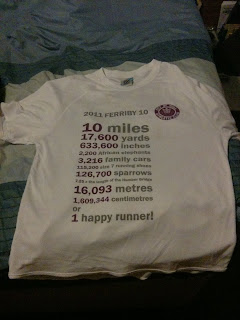 I was pleased with my performance, mostly. I felt in quite good shape all the way around and my time was slightly quicker than the only other ten miler I can recall doing, the Chesterfield Spire 10 last year. The only real down side was that I’d been battling all the way with a ‘senior’ gentleman and was slightly gutted (ok massively gutted) when he skipped away from me on the final hill and beat me by, well, too many sparrows to mention, although probably not, thankfully, by a full elephant. So as the t-shirt says ‘1 happy runner’ (moderately).

I walk back to the next village, where the car is parked, to collect the dogs and then we all head back to meet L. We don’t quite get there before she crosses the line. Although the dogs get the good walk that they desperately needed, whereas I get a ‘good’ walk I didn’t need at all.

After the race we head down to visit an old school friend of mine somewhere near Market Rasen and they kindly do us a cracking Sunday lunch. Great post-race recovery food.