Finally Made It In Life

We are supposed to vacate the cottage this morning by 10am and it’s purely Jeremy Kyle's fault that we don’t. My friend is clearly a regular fan and L seems riveted to the point that she seems to be contemplating throwing a sickie tomorrow. I’m, of course, only mildly interested.

Back home, Daughter is up earlier than us due to me accidentally leaving my alarm on. I don’t know what she’s complaining about, she needed to be up early for college anyway. She ought to be thanking me.

Eventually we’re out of the cottage only a little late. We then rendezvous again at Ambleside Pier to perform a dubious looking handover of wads of twenty pounds notes. Cottage payment. We don’t seem to get billed extra for having the best bedroom; he’ll probably get his own back next time. 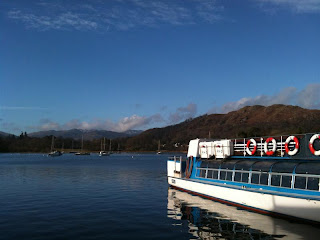 Only a few hours after heading home I’m off out again to my first meeting as a committee member of the dog club. Yep, I’ve finally made it in life. The first item on the agenda appears to be an hour’s arguing carried over from the AGM which descended into... well, arguing. The second item appears to be an attempt to dissolve the committee because it wasn’t elected with a show of hands and as far as we can remember never has been. So I might as well not be here then, we do not exist.

Eventually things calm down and I get the team manager’s job, that I fancied but will surely regret and a few other tasks. It turns into a very late night session, just like the House of Lords perhaps, and it’s around 11pm when I get home.