The Room At The Top

Our room is on the top floor and not only can we hear the wind howling outside the window but we can hear the rain being thrown against it as well. Time for another hour in bed I think.

Daughter emails to say that she and her friends are having pizza for breakfast. We are appalled at the decadence of Daughter but not too appalled to tuck into our full English, courtesy of our friends who we gave the 'lesser' bedroom to. We’re really riding our luck this holiday.

Some sheep brave the weather and sit outside our window. Neither dog notices, well not yet but the whole village will know when they do. Ah, now MD has.

Eventually we go out for a walk in the elements. Leaving our base in Chapel Stile to head out along the edge of Rydal Water to Rydal itself before taking the Coffin Route to Grasmere. The Coffin Route was originally used to transport the dead from Grasmere to Ambleside for burial. Though apparently not since 1821. Then it’s around Grasmere Lake, through Grasmere itself before heading up Red Bank and back to Chapel Stile. A distance of around fourteen soggy kilometres. The rain did stop briefly on a couple of occasions but only very briefly. 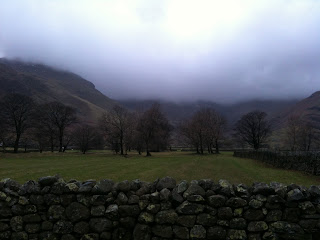 At one point MD fell into a lake. Not that the lake should have been there. We were theoretically on a path and the edge of Rydal Water should have been about 20 metres away but the weather had built a huge watery extension to the lake. This caused us to shin up a rocky outcrop in order to circumnavigate it. MD lost his footing and... splash. We had to fish him out.

We head back to the cottage and attempt to dry and de-mud two very dirty canines. I consider hanging MD on the washing line to dry but the RSPCA might not approve. So a good towelling down has to do instead.

Did I mention we also have the better of the two bathrooms? So we make use of the only bath in the cottage to warm ourselves up after our soaking.

The evening follows a similar pattern to the previous night. The pub has another dark ale on the bar, from Ulverston, although the Snecklifter is still better but these things have to be tried. Then its home for another dose of bottled reindeer from the selection pack.