L goes into work while I take the dogs on the park where somebody's wedding photos get ruined by a dog sneaking into camera shot. Oops.

Blimey, the council are spending money. Please excuse my excitement at this but for the first time in nearly 20 years, new bins! 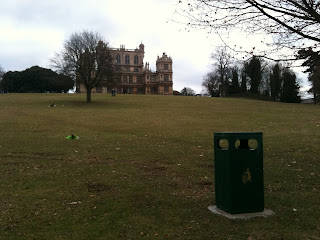 When we first heard about it, we had no real urge to go and see the story of the founding of Facebook. That was until everybody kept saying how good it was. So now here we are, The Social Network.

It seems it all happened in 2003. In the same year that someone cut their arm off with a blunt pen knife in Utah, across in Massachusetts someone else was stumbling across a half decent idea.

The film opens with a socially inept Harvard University student called Mark Zuckerberg (Jesse Eisenberg) in conversation, if you can call it that, with his then girlfriend Erica (Rooney Mara). He is so immensely annoying that you soon wonder what possessed her to become his girlfriend in the first place. Your second thought is why is she still his girlfriend and then, why hasn’t she hit him yet because you, the audience, certainly want to. 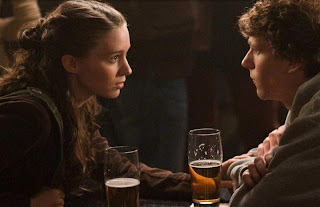 Suddenly she comes to her senses and dumps him. In some style as well. ‘You're going to go through life thinking that girls don't like you because you're a nerd. And I want you to know, from the bottom of my heart, that that won't be true. It'll be because you're an asshole.’ Don't mess with Rooney Mara; she's to be the new Lisbeth Salander you know.

So Zuckerberg is an asshole and he reacts as most teenage assholes would. He goes home and dreams up the least likely way of making himself more appealing to the opposite sex. In one night, whilst drunk, he hacks into the databases of various student halls, downloads pictures of all the female students and creates a website called ‘FaceMash’ that enables male students to rate the 'hotness' of their fellow female undergraduates. His best friend Eduardo Saverin (Andrew Garfield) is on hand to provide the scoring system, an algorithm previously used for ranking chess players.

It's such a success that it brings down the computer network at Harvard, gets Zuckerberg into trouble and of course takes his status with the ladies even lower. It does however impress the Winklevoss twins, Cameron and Tyler (Armie Hammer, both of them). They plan to launch their own website called Harvard Connection, a social networking website, with the main attraction being exclusivity to Harvard students.

They ask for Zuckerberg’s help and he agrees to work with them. Only that, Zuckerberg’s social interactions are about as false as your average Facebook user’s. He immediately sees a better idea and although he maintains a sham 'friendship' with them, he has no intention of helping them, as he sets up his own site.

Again Eduardo helps him, this time providing the finance to get the project off the ground. Once complete, they distribute a link to ‘thefacebook’ and it quickly becomes popular throughout Harvard. The ‘Winklevi’, as he calls them, are enraged that he effectively stole their idea.

The story zips along at a frantic pace as ‘thefacebook’ expands into more universities. Zuckerberg certainly comes over as a nerd but a determined one and also one that can be easily lead, if it gets him what he wants. Enter Napster co-founder Sean Parker (Justin Timberlake). Parker discovers Facebook in the bedroom of a girl from Stanford University, presumably he knew he was at Stanford because Stanford girls seem to have, rather helpfully, the words ‘Stanford’ written across the back of their knickers. 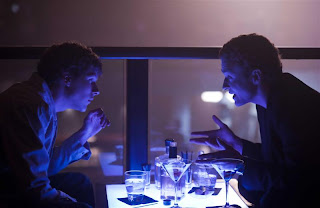 Eduardo is immediately sceptical of Parker, whilst Mark just about falls in love. As Parker persuades Zuckerberg to drop the ‘the’ and ingrains himself into Facebook's project, Eduardo gets more and more sidelined as Zuckerberg increasingly sides with Parker on business matters. Eduardo gets angry, freezes the company's bank account whilst simultaneously falling out with his girlfriend over why his Facebook profile still lists him as ‘single’. With such cast iron evidence that he’s having an affair at her fingertips his girlfriend sets fire to the scarf he just gave to her as a present. Yep that's Facebook. 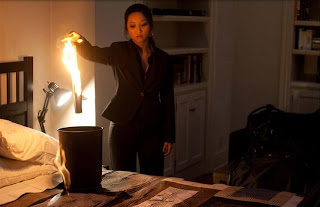 Then when Eduardo discovers his share in the company diluted to next to nothing, he feels betrayed by his one-time best friend, he confronts him and announces his intention to sue. Parker, the wag, offers him his original stake back. Meanwhile the ‘Winklevi’, after much heart searching over the un-Harvard-ness of suing a fellow Harvardite, have also eventually decided to take Zuckerberg to court over intellectual property theft. 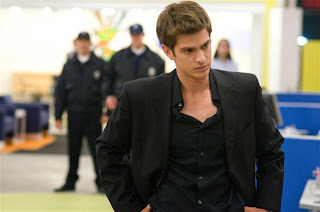 At first the film is a little hard to get the hang of. There is a lot of rapid fire dialogue and the format of the film is a little confusing at first. We are watching the two resulting court cases, or at least the two pre-trial deposition hearings, in tandem with flashbacks to the events being submitted as evidence in them, namely the founding of Facebook. Both lawsuits ultimately resulted in large out of court settlements.

This film come docudrama may be about Facebook but it’s also about the universal themes of friendship, loyalty and betrayal, where money and greed can ruin almost anything. The characters may represent today's world but the themes are as old as the hills.

The principal male characters were all pretty odious, so you don’t really care too much about what happens to them but then I guess they were all supposed to be, well, assholes, and to this end they all played their roles really well. It's hard to feel empathy with any them, well except perhaps a little for Eduardo, the outsider, who’s a far nicer guy than any of the others. 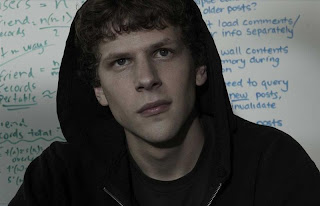 The film ends with Mark sending Erica, his ex, a ‘friend’ request on Facebook and then refreshing the page every few seconds searching for a positive response. After all, getting girls was the whole idea of the Facebook project in the first place.

As one of the lawyers puts it. ‘You're not an asshole, Mark. You're just trying so hard to be one.’

Zuckerberg may now be a millionaire but in one sense he’s learnt nothing at all.

The Social Network is an engaging film, a good film. It may not be a classic, but it’s trying so hard to be one.

Just time to pop into the Silk Mill for one before heading home.