Culture To Be Had

Before I leave this morning I have a quite word with MD, man to man’s best friend, about his morning walks with L. He looks contrite and appears to be willing to behave but he’s probably got his toes crossed.

I head off on the bike, which is a bit miserable, weather wise. Meanwhile L says MD is almost a saint. Blimey.

Tonight L lets me go off to a gig on my own and stays in with the boys, to chill out and throw rubber bones, balls etc. Meanwhile I battle with Rugby’s car parks. They’re all full. It must all be happening tonight. The cars are parked ten deep around my destination. Yep, Asda next door is really busy tonight. Who the hell does their weekly shop on a Friday night? Not me, there's culture to be had this evening, I'm off to the library.

British Sea Power have played some rather weird places, in fact earlier this week they played on a boat outside the Houses Of Parliament, in aid of renewable energy. Tonight they are live in Rugby’s Library, an event intended to highlight the over keenness of councils to close libraries. It has been organised in collaboration with the ‘Get It Loud In Libraries’ project.

Security was crap, there are no actual tickets and I got in with a printed email of my booking. If I'd know, I'd have printed a few more off and sold them outside. Then I could have afforded a t-shirt because I’ve not had time to visit the hole in the wall.

I have expected the gig to be taking part in some annex or meeting room but no, it’s slap bang in the centre of the library, which is pleasantly small and intimate. 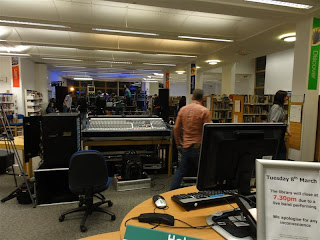 Although the book shelves do restrict the number of potential viewing points somewhat. What's worse is that if you try to nip down an isle to uncover some secret route to the front you find your way blocked by a pile of the band's discarded equipment boxes.

Having explored all down one side of the room and decided that although the view from the poetry section was ok it wasn’t great, I decided to try the other side. In the end I get a really good spot. If you know Rugby library, I was just ahead of the Hindi reference section not far from the magazine racks, which were stage left.

During all my jostling for position the support band are playing. ‘Life In Film’ are another perfectly adequate guitar based indie band, with plenty of lively, jingling tunes. Better than most in fact. I shall certainly keep a look out for them. 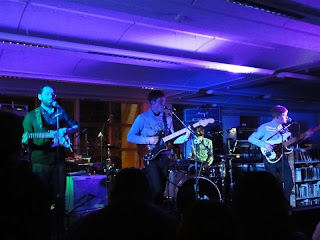 It was interesting to see what the acoustics would be like, as I imagine it’s not something that libraries are known for. I mean you're not supposed to make much noise are you. ‘Life In Film’ make plenty and the acoustics seem surprisingly good. The stage too is reasonably high and there’s no barriers between the band and crowd, just a ‘bad sound area’ marked out on the floor which I think you’re supposed to keep out of. So all set for a good gig then. Although no foliage or flags adorn the stage tonight. Damn library rules. There’s also no alcohol only a coffee machine, even the band’s own Zeus beer isn’t available until afterwards. If the crowd are all on maxpax coffee it could get very lively indeed.

There’s not much of a break between bands for once and then after a brief welcome chat by our hosts, it is suggested that we have some music. The band take the stage and oblige, launching into their most recent protest song 'Who's In Control', the opening track from their latest ‘Valhalla Dancehall’ album. An appropriate choice with its lyric ‘I'm a big fan of the local library, I just read a book but that's another story...’ and matching t-shirt. 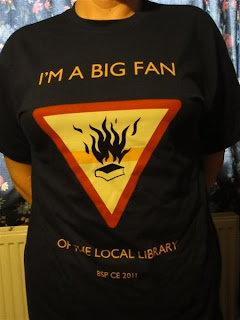 The crowd seemed a tad subdued to start with, perhaps keeping in line with the location but the show gradually picks up momentum helped by a ferocious 'Apologies to Insect Life' and lively newies such as ‘We Are Sound’ and a particularly impressive ‘Stunde Null’. 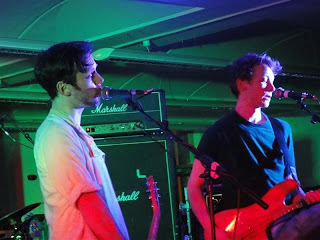 ‘Lights Out For Darker Skies’ is always quality but it’s especially good tonight. Then the brothers do their traditional mid set swap and Yan hands over vocals to Hamilton. Who delivers the quartet of ‘No Lucifer’, ‘The Land Beyond’, ‘Once More Now’ and the tremendous ‘Mongk II’. Now no disrespect to Yan but I always look forward to Hamilton’s segment. He really does seem to get a lot of the best tunes. 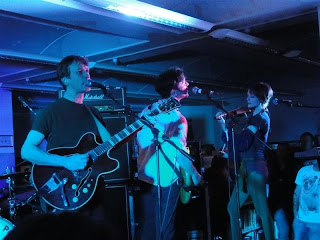 I haven’t seen them on this current tour before and it’s great to see a load of not played enough classics reappear in a reshaped set, such as Hamilton’s ‘The Land Beyond’. One of three from the often largely ignored 'Open Season' album, from which Yan, once he returns to lead vocals, spoils us indeed with both 'Oh Larsen B', everyone’s fave ice shelf, which is massive and 'It Ended On An Oily Stage'.

Those come after a hugely impressive ‘Zeus’, at which points the library starts to get more lively than it probably ought to and a group of girls rush the ‘bad sound line’. ‘Thin Black Sail’ doesn’t calm things down at all. All we need now is Noble to go off on one of his usual climbing sprees atop the Modern History section but disappointingly and probably wisely, it doesn’t happen. I have visions of library shelves coming crashing down. He does refer us to an interesting section on ferrets but shows no inclination to climb up there to show us personally. 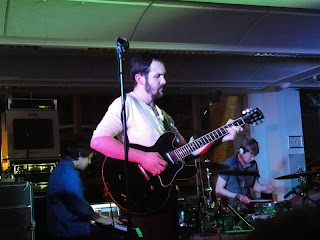 Recent single 'Living Is So Easy' leads us into a final sequence of ‘Waving Flags’, ‘Great Skua’, ‘Carrion’ and ‘All In It’. I think my hearing collapses during ‘Carrion’. The gig certainly wasn't quiet. I was standing right in front of the left speaker and as the band go off I realise that I've already got a hissing noise in my left ear and there’s still the encore to come. 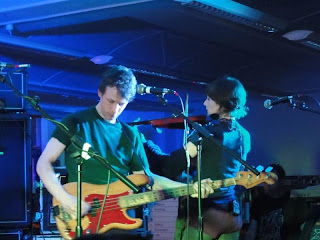 The set list had Open Season's ‘Like A Honeycomb’ down as part of a three song encore which would just have completed my night but sadly things were running late. I had no idea what the curfew was on a library but I think we found it. Ours at home is 7.30, so we did well and we did get a twenty song main set. What we do get is a typically rousing ‘Spirit Of St. Louis’ to close.

BSP have had their problems of late and had to cancel their European Tour for financial reasons, whether this is low ticket sales or low album sales or something else I’m not sure but they’re certainly popular tonight and have pretty much sold out all their UK dates. Tonight, I thought they were exceptional. I nip out, find a cash point and get that t-shirt. For which you can get a discount with your library card.

Next up for the band... Jodrell Bank apparently.